When we came out west in 2013, we blasted through Idaho without stopping, on our way from Glacier National Park in Montana to the coast of Washington State.  This time, we dropped south from Missoula on US 93 to cross the Bitterroot Mountains and down into the Salmon River Valley.  Gorgeous, remote, rugged, sparsely populated, all the things we look for.  We stayed at a small park on the river just north of the town of Salmon and took in the local flavor.  The next day we continued south to Arco, ID to see Craters of the Moon National Monument.  It's a large lava flow area that I'd never heard of.  Very well named though, as the plants haven't been able to convert much of the lava to soil in the 2000 years since the eruption.  They only get 7 inches of rain a year out here.  From here, it's out to Oregon, so I'm glad we slowed down and spent a couple days in Idaho.  You could spend all summer in this state and not see everything, really beautiful.  On to the pictures. 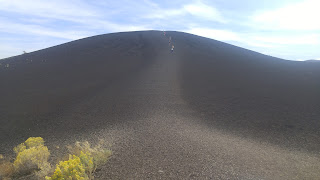 Craters of the Moon.  Those are people walking up this cinder cone.  I saved my legs for the lava tube caves.

"Scenic" view.  This place has a rugged beauty all its own. 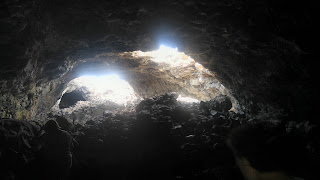 Coolest picture I was able to take.  There's a collapsed lava tube cave that goes on for about 800 feet.  In a couple places, the roof had caved in letting in just enough light to see.  That's Laurie in the foreground.  No trails through this thing, we were almost spelunking! 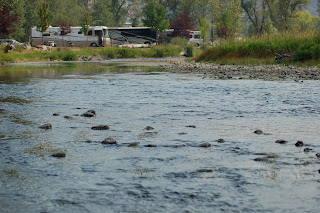 The Mighty Endeavor windshield to the Salmon River. 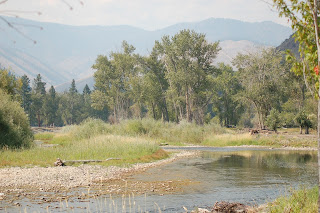 Downstream from our campground. 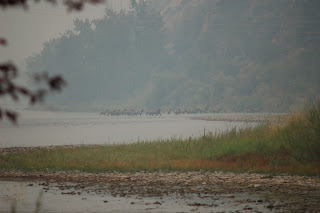 Walking Charlie in the early AM, I looked up river and saw a large herd of elk moving across the river.  I was able to grab the Nikon in time to catch the end of the herd.  There were dozens of them.  The haze isn't early morning fog, it's smoke from all the fires.  It was clear when we got there, but the wind shifted out of the north and we got a lot of smoke late in the day. 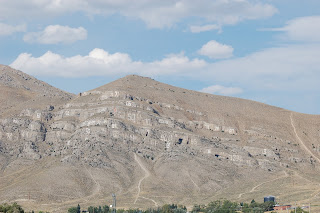 Click on this to expand it.  Arco, ID (pop. 995) is one of those towns where apparently the school kids are proud enough to scale the cliff overlooking the town and paint the year of their graduation on the side.  Private land, so no laws were broken during the commission of these shenanigans.  Also, check out the clear skies.  The wind came up out of the southwest and pushed what little smoke we had out of the area.