We left North Little Rock on Sunday morning and took 2 days getting to Dodge.  We overnighted in a forgettable combo RV/Mobile Home park in Enid, OK on our way.  I have to say, the driving scenery in this part of the country leaves a lot to be desired.  That's why we're just now finally, begrudgingly, getting around to finishing off these last 4 stickers on the map.  I put the Kansas sticker on yesterday when we checked in to the GunSmoke travel park.  Dodge City has a couple claims to fame, and that TV show is one of them.  The other is Boot Hill and the old cow town glory days, where Wyatt Earp was assistant Marshall before moving out to Tombstone.  Today, I learned he was never more than an assistant anything, but for some reason he's very revered.  I think it's the killer mustache.  We stopped here to tour the recreated old Dodge City and museum.  Check.  We also played penny slots at the casino and had a great steak dinner down by the tracks.  Dodge is now a nice little working class agricultural town with a rich history.  Time to move on to our next sticker: Nebraska.  Here are a couple pictures from Dodge City. 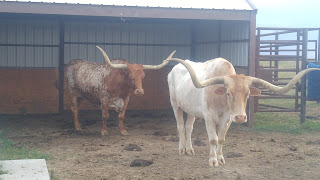 Longhorn cattle were driven up from Texas to Dodge to be rail transported back East.  Head'em up Rawhide! 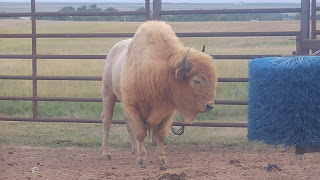 Hundreds of thousands of Buffalo hides were shipped East from Dodge.  Probably not a lot like this rare White Buffalo. 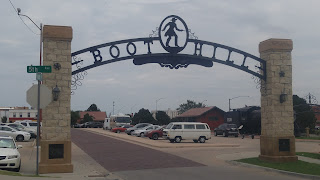 An untimely death, normally from violence, was often marked by being buried with your boots on.  Hence the name...