Wow, I think we might have found our favorite place in the whole country.  We stayed up in the hills above Bend at LaPine State Park.  It was very nice, spacious woodsy sites with full hookups at an affordable price.  Just hanging out at the site was sublime.  This are has just about everything for the outdoor enthusiast.  Skiing, mountain biking, river sports, hiking, etc etc.  Plus, it's high desert so you get trees without the rain.  They don't even get a whole lot of snow, except up on the peaks where you want it.  The mountain tops around Bend were still covered with snow in late August.  Very nice.  One thing we did that I couldn't capture on film was explore Lava River Cave.  This is one of those lava tubes that went hollow, but it's a mile long, totally underground, with no electrical lights.  You bring your own flashlights and hope they don't fail.  We took 6.  It was amazing, and since it was during the week and most of the kids have started back to school, we had it almost to ourselves.  On to the pictures: 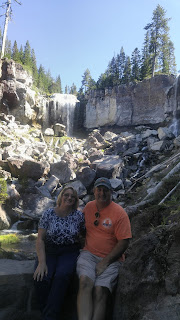 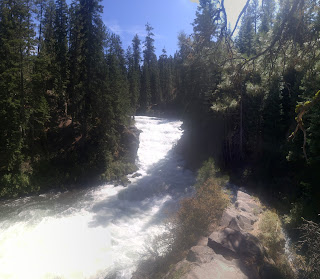 Benham Falls, LaPine State Park.  It's really a cascade of the Deschutes River, but when it's flowing like this, they're right to call it a waterfall. 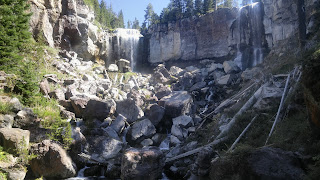 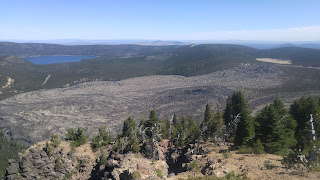 Big Obsidian Flow.  This was a relatively recent belch by the Newberry volcano.  This picture was taken from Paulina Peak, a couple thousand feet above the flow.  The picture below is us in the middle of it. 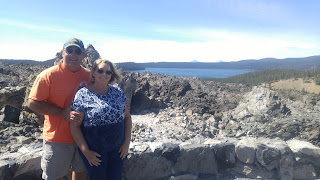 Intrepid travelers in the middle of Big Obsidian Flow.  There were chunks of pure, shiny black obsidian glass as big as cars.  Everywhere. 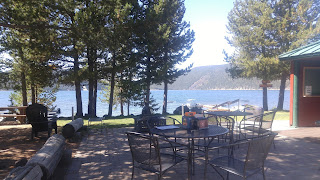 Our lunch view from East Lake, in the Newberry caldera.

Panoramic shot of Newberry Caldera, one of the biggest volcanoes in North America.  The two lakes and the obsidian flow are all contained within the caldera.  Luckily, it's been well behaved for a thousand years or so. 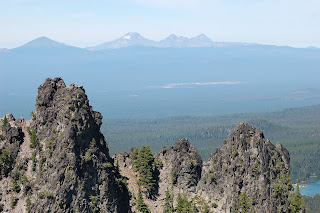 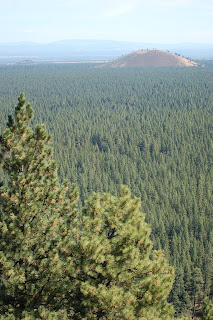 A small cinder cone.  This place is highly volcanic.  Or at least it was... 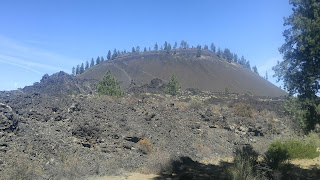 Lava Butte.  A large cinder cone.  We took a shuttle bus to the top and hiked around the rim.  No private vehicles allowed. 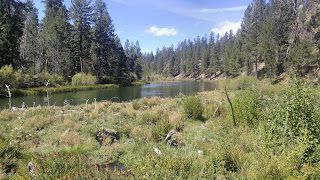 The Deschutes River near our campsite. 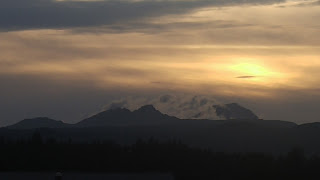 Sunset over Bend.  Snow on the peaks in late August!