During the summer of 2013, we got to see the northern 2/3 of the Oregon coast before we cut inland to camp at Crater Lake National Park.  It was spectacular.  Oregon does a fantastic job of keeping their coastline undeveloped, something Florida completely missed out on.  So this year, we rejoined Highway 101 where we left it and saw the remainder of the southern coast.  The trip from Silverton to Coos Bay was not without a little drama.  The road meanders a lot, following the course of the Umpqua river.  I pulled over on a gravel turn out to let some cars pass and when I pulled back on the road, the motorhome was rolling around like a wounded cow.  I pulled over immediately to find a complete flat tire on the Chevy we tow behind.  Dang.  30 minutes later we were on our way, but when we got to a tire shop I was shown that the tire was munched.  Oh well, I was going to need new tires soon anyway so I went ahead and go a new set.  If that blow out had happened at speed, in the mountains, I don't want to think about it.  So, we camped 2 nights in complete fog (all day, all night, no break, yikes) near Coos Bay, then headed south for 5 nights in paradise at Harris Beach State Park in Brookings, OR.  The sea fog was much lighter and the local area was fantastic.  We got a really private hookup spot with cable TV, a real treat in a state park.  The best part was the view of the ocean out our windows.  I don't know what that view would cost if you could buy the land, millions.  Anyway, Brookings, OR definitely sealed our opinion of Oregon as the prettiest place in America.

Between Reedsport and Coos Bay there are some crazy huge dune areas running along the Pacific.  They've done a pretty good job of balancing preservation and access.  We saw a ton of dune buggies and motorcycles set up just for tearing up the sand.  There were also pristine areas where there weren't even footprints for miles.  Day hiking in sand is hard work. 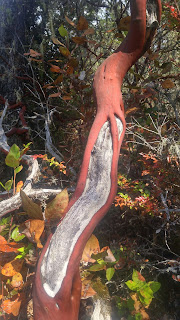 Some sort of tree.  I just thought the red skin of bark over the older silver was cool looking. 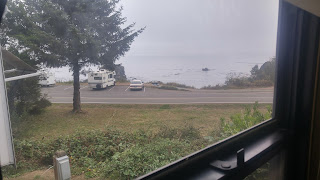 The view from our living room window in Brookings. 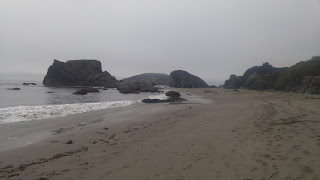 Harris Beach, a short walk down the hill from our motorhome. 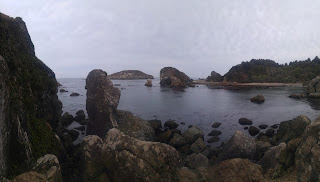 There is just no end of rugged, rocky beauty on this stretch of the coast. 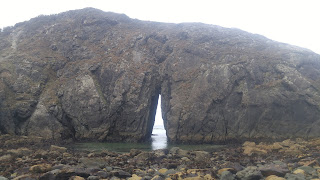 Walking along the beach, I came across this rock with a split worn by the ocean.  It's probably not clear in the photo, but the split was about 30' high and the water pulsed in and out like it was alive. 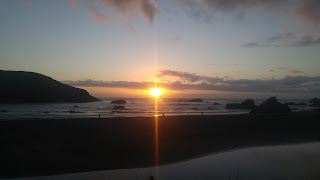 We couldn't believe our luck.  An actual sunset on the Pacific.  It's almost always obscured by some kind of clouds or sea fog.  This was on our last night in Oregon too, sort of a "thanks for visiting, come back and see me" message.  We'll be back.