Huge, epic, awesome.  I run out of superlatives to describe the Yosemite valley.  After Bend, we made a fairly epic drive up CA120 west of the park.  We missed Yosemite in 2013 because of fires, but it was all clear this time.  After hours of boring driving on I-5 through the San Jauqine Valley, you climb up the Sierras.  I have ever increasing respect for Cummins and the engines they build.  This was way worse than any climb we've ever done on the interstate, and we've been over the continental divide dozens of times.  Lots of switchbacks and about 5000 later, we were safely tucked away at the closest park to the entrance.  The campgrounds in Yosemite National Park are a little small and even harder to get to, so we used the Chevy for touring.  The national park is enormous, maybe 50 times as big as the valley with El Capitan and Half Dome that you see all the pictures of.  We toured the valley, but we tried to see some other parts as well.  I think the hikers have the best of it.  With 800+ miles of trails, they get to see sights that you never experience sticking to the roads.  Overall, wonderful. 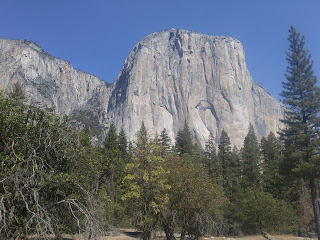 El Capitan.  There were climbers on the left hand side we could see through our binoculars.  The were tiny, invisible to the naked eye.  These pictures are great, but like most, it's just not like being there.

A panorama of the granite faces on the north side of Yellowstone Valley. 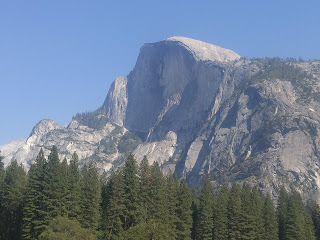 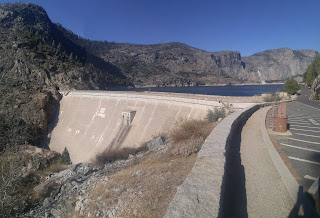 One of the less explored areas of Yosemite National Park.  The Hetch Hetchy (that's right) Valley made a likely candidate for a dam and reservoir after the 1906 San Francisco fire.  Even though it was a National Park at the time and the naturalists fought it, they built the O'Shaughnessy Dam to form the Hetch Hetchy reservoir.  It provides 85% of San Francisco's drinking water.