Just a short 7 hour ferry ride from the northern tip of Nova Scotia, we arrived at our northern destination, Newfoundland!  Coming off the ferry, it was dark and foggy, the marine layer was thick and rolling over the mountains like some kinda Lord of the Rings movie.  Our friends Fred and Loretta Welsh met us on the highway about an hour off the boat to lead us into their friendly little town of Piccadilly.  On the map of Newfoundland, look for the town of Stephenville on the southwest corner, site of the former Harmon Air Force Base.  We were running around the peninsula west of town.  Interesting geographical note, when you're driving across the isthmus, the water on the north side is held back by a levy, and it's a few feet higher than the water on the south side, though yes, both at "sea level."  The road is actually below the level of the sea on the north side.  Saw it with my own 2 eyes.

We met the Welshes at the Hanscom AFB campground outside of Boston in 2012.  Fred retired the next year and they started snowbirding to Florida every winter.  I blogged about them and their friends Danny and Marlene back in April when the 6 of us took a cruise together.  Danny owns a construction company, a restaurant, and is building a campground.  That's where we stayed in Picadilly.  Here are some pictures of our first week in Newfoundland: 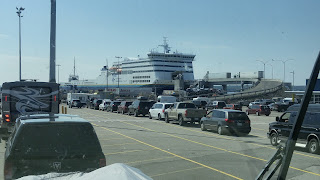 Sitting in the parking lot at the ferry terminal in North Sydney, Nova Scotia, waiting for our turn to load up. 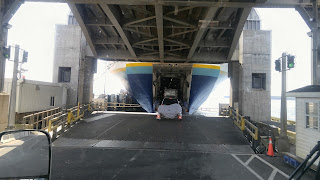 About to drive into the belly of the ship.  There are 3 car decks, this thing is huge.  The iron works at the top of the picture are the car loading gangway for the deck above the one I'm parking on. 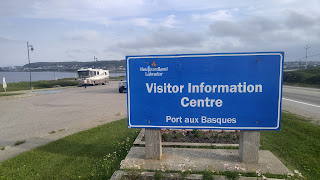 We made it!  That's our rig to the left of the sign.  We disconnected to load into the ferry.  They say it's cheaper, and in Alaska we had to do some backing up to get parked straight.  We can't back up with the car attached. 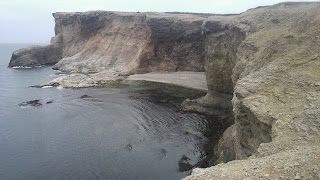 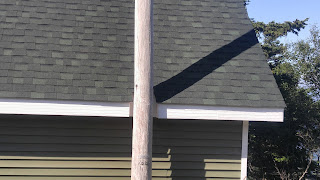 Okay, so my Dad taught me to measure twice and cut once.  We were driving along and Fred pointed out this fellow who built a garage and didn't measure twice for the roof line where it approaches a telephone pole.  Oh well, just cut ahnudder two or tree feet outa dare and she's good... 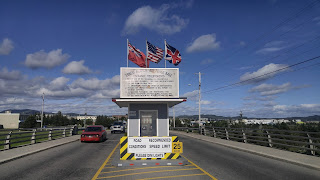 The front gate of the former Harmon AFB.  The runway is still in use for commercial flights, and all the buildings are pretty much intact, though turned over for civilian use. 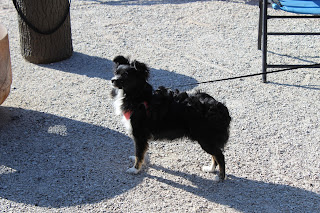 Missy is about fully grown now, 8 months old in this picture. 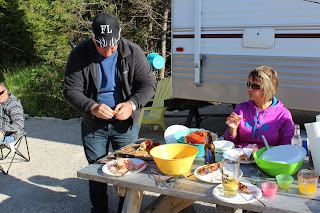 Danny at frame left, Fred concentrating on a bite of lobster and Marlene. 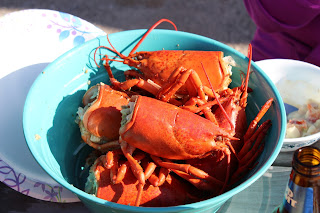 Fresh steamed lobster heads.  We ate the claws and tails.  If you called heads, you win!