The west coast of Newfoundland is really rugged and remote, but very beautiful.  We only made it as far north as Port aux Chois, for those following on the Don and Laurie's Travels interactive map and guide.  While on the coast, Fred took us around his home town of Corner Brook, a pretty large port city for Newfoundland, with all the comforts of home.  Especially hills.  Lots of hills.  We stayed two nights in the city park before moving up north.  The tall ships were making their way into Corner Brook for the weekend, so I got a couple nice pictures.  After Corner Brook, we went up north a bit, staying north of Cow Head, then back down for a lovely evening cliff side in Parson's Pond before arriving in Rocky Harbour to tour Gros Morne National Park.  Here are some pictures: 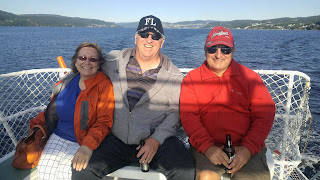 Loretta, Fred and me.  Laurie wasn't feeling well, so she passed on a beautiful, but chilly boat tour in Corner Brook.  There were two gents playing traditional Irish and Newfoundland folk music in the cabin below, but it was such a lovely evening everybody was up on the top deck. 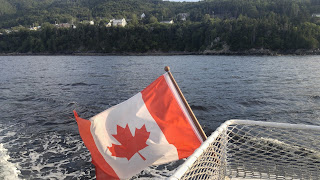 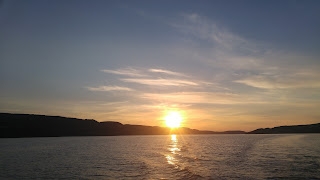 We don't get nice clear skies for sunset pictures every day. 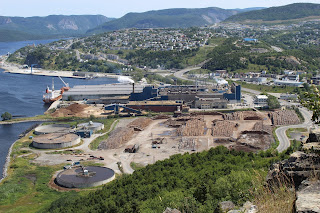 The lumber mill in Corner Brook, lots of raw material in the yard. 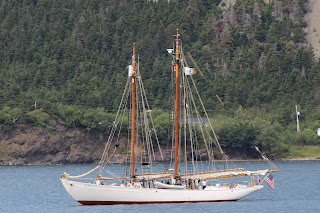 One of 4 we saw making their way up river to Corner Brook. 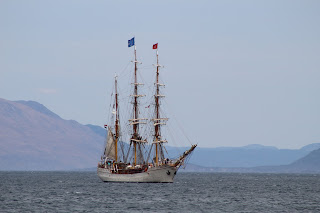 Nice right?  Like something out of a pirate movie.  If you zoom in, you can see people working the square sail in the foremast. 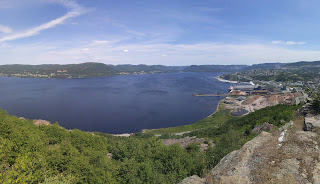 Corner Brook from Captain Cook's point.  I didn't realize he mapped Newfoundland before heading out to the Pacific.  The Cook Islands are named for him, and he was killed in Hawaii. 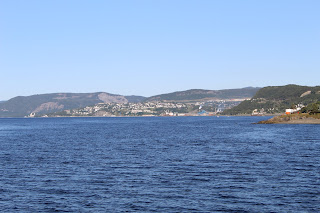 Town from the boat, headed out to see the sea

Arches Provincial Park, these were carved by the sea 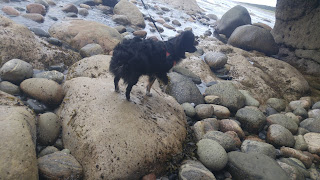 Missy is getting really adventurous.  She didn't mind scampering over all these big smooth rocks.  I would have thought it would hurt her feet.  She doesn't like sea water though, so she learned it doesn't taste so good... 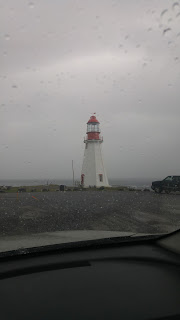 The rain socked us in at Port aux Chois, but still got a lighthouse photo

Our cliff side camp spot in Parson's Pond 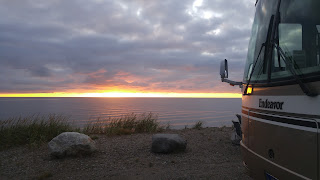 What a view, sunset was awesome 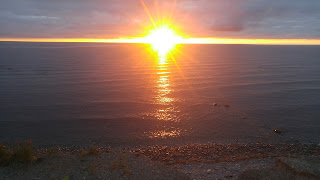 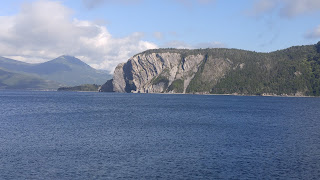 We took a boat tour in Gros Morne National Park, in Western Brook Pond.  Pretty big lake actually, use to be a river leading to the sea but the stream got cut off and it filled in with fresh water over the eons. 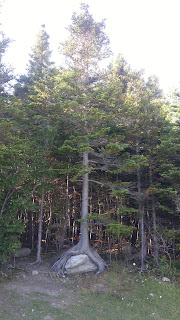 Interesting how this tree must have gotten started, all alone and exposed on top of this rock, but it showed the rock who's boss! 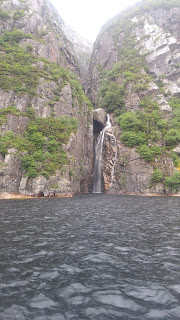 One of many waterfalls in Western Brook Pond 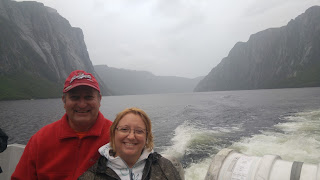 Wet, intrepid travelers.  The weather for our Gros Morne boat tour was a little...gross. 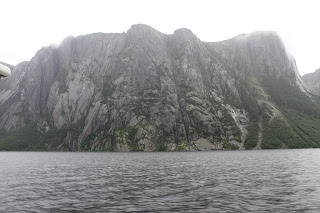 Western Brook Pond is about 400 feet deep.  I was watching the depth sounder, and right off one of these cliffs it was still over 100 feet deep. 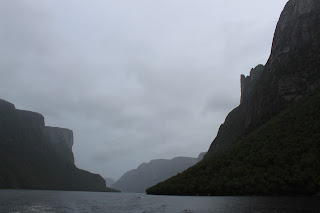 The gray weather had a beauty all its own 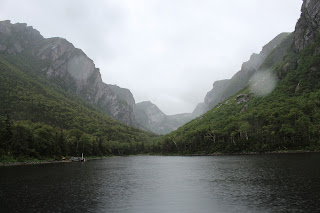 End of the line, where Western Brook feeds into the pond.  They'll drop you off at the dock for hiking if you have a back country pass.  Way back...