Well, we found another beautiful place that we'll just have to come back to.  Prince Edward Island is it's own tiny province, just 140,000 residents, connected to the mainland by the 8 mile Confederation Bridge.  The toll was $64.50CD, but much more convenient than hopping the ferry across.  It's hard to describe how pretty it is.  It's not like there's majestic rock formations or giant trees like we've seen in our travels.  It's man-made beauty.  Everyone's house is painted and kept up, even the 200 year old farmhouses, and the fields all seem to be manicured.  It looks like some of the prettier farm country I've seen in pictures of the British Isles.  Not surprising, really, pretty much everybody on PEI is from there.  We spent 4 nights at the New Glasgow Highlands campground, which was not enough.  We had a little work done on the rig, new fuel filters, but that only took one morning.  We drove around a pretty significant portion of the island and never saw anything trashy.  Really cool.  Come to find out, my maternal roots are from here, a few generations back.  I was able to find a distant ancestor's grave.  Having a familial link here made it even more special.  We'll be back. 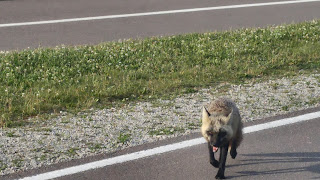 The first evening we went for a drive toward Cavendish along the sea shore.  There were a couple foxes hanging out by the road, not scared of anything.  This one was looking at Missy like she'd make a nice snack.  She was going buh zerk. 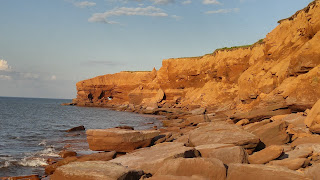 The whole island is red dirt/rocks.  I didn't see a chunk of good old granite or anything the whole time, just red. 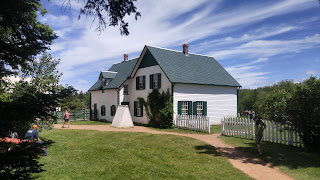 The book Anne of Greene Gables was inspired by this house in Cavendish, it belonged to the author's cousin 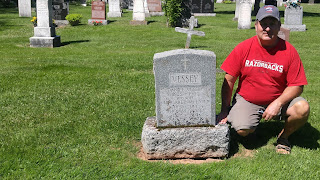 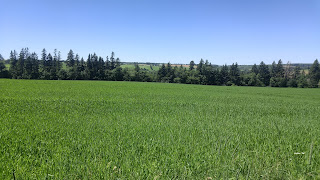 It was hard to capture the rolling hills and farm fields.  Beautiful and green, everywhere you look.