After PEI, we headed into Nova Scotia where we stayed in 4 different places, all on the water.  On the way into Nova Scotia, we stopped for fuel on the outskirts of a little town called Springhill.  Fred, the fellow we're going to see in Newfoundland, was a town constable there until 2012.  I asked the woman behind the counter if she'd lived there long, yes, and do you know a retired constable named Fred Welsh.  "Oh, you missed him my dear, he moved back to Newfoundland!"  Small world.  I talk to one person in Springhill and sure enough, she knows Fred.  Our first stop was in a Town called Truro.  It's at the very end of the Bay of Fundy, where the tides are so strong.  The rising tide pushes a small wave called a bore up the Salmon River, and it looked like a good place to see central Nova Scotia.  We took a few nice country drives and went for a really beautiful walk with Missy in the city park.  Three nights and we're outa there.

Next stop was land's end on the southwest coast, Yarmouth.  There's not much in Yarmouth at all, but we had a beautiful camping spot with a fire ring.  It seemed like we had the place all to ourselves, Castle Lake Campground and Cabins.  It's pretty new, so still some road work and such going on.  We found a manicured 1/2 mile path going down to the ocean, so of course Missy got a lot of exercise.  Three nights, and we're outa there.  Next top: Halifax.

Halifax is the provincial capital, and a pretty good sized metropolitan area.  We stayed at a park called Woodhaven, not too bad, but we spent most of our time running around the countryside seeing the sights.  There's a touristy place about an hour outside of town called "Peggy's Cove."  We had to stop there, otherwise we'd never be able to face our friend Peggy again.  It's just a lighthouse and interesting rock formations, but it made for a nice drive in the country.  Time flies though, and after a couple trips to the downtown waterfront, it was time to move on.  Four nights and we're outa there.  Next stop: Cape Breton Island.

The northern third of Nova Scotia is an island attached to the rest via a causeway and bridge, not much at all separates them though.  This is one of those "we need to come back" areas.  We spent 3 nights at the northern tip waiting on the ferry to Newfoundland.  It's beautiful, with the Bras d'or Lakes pretty much everywhere you turn.  They're like an interconnect inland sea of large saltwater bays, but they call them lakes because they're so protected.  Really pretty.  We intend to stop for a few more days in a different area of Cape Breton Island when we get back from Newfoundland, 3 weeks from today.  We get on the ferry in a few hours.  Here are some Nova Scotia pictures: 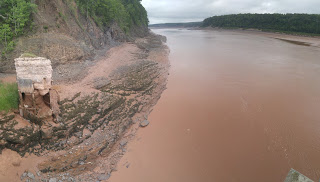 Maybe it's called a tidal "bore" for a reason.  You have to be here, pictures aren't clear enough to see the wave coming.  This is low tide. 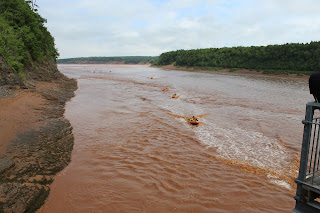 Same spot a few minutes after the tide starts rising.  Hard to see it in the pictures, but this is the bore coming in, the tide rises about a foot a minute.  These folks are on a zodiac raft trip up the river at high tide. 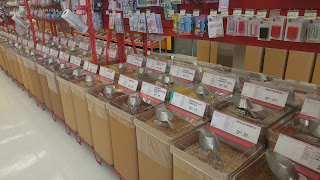 This is the bulk barn.  Everything from candy to dried rice, beans, flour of all sorts, spices, all available "by the pinch or by the pound."  They had pretty much everything you can scoop or spoon into a bag or container.  Everything's sold by weight, even shortening and pie filling. 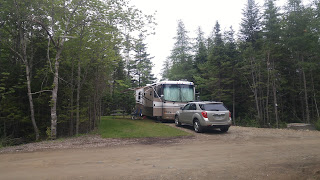 Our spot at Castle Lake campground.  They're not always this secluded. 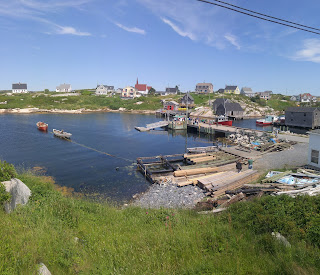 The actual cove..Peggy's Cove.  It's tiny. 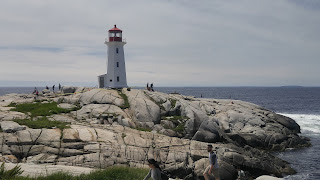 Peggy's Cove Lighthouse and the marked up boulders left over when the last glacier retreated. 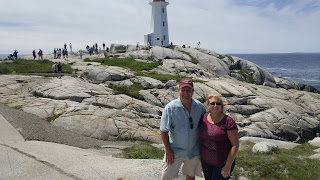 Intrepid travelers.  I told the fellow to get the whole lighthouse.  Sigh. 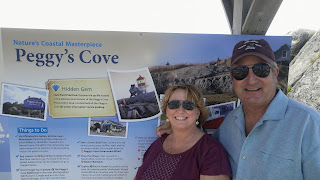 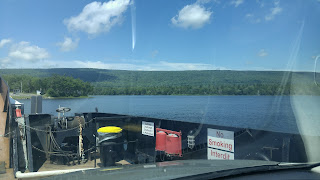 Driving around Cape Breton Island, Google Maps didn't tell us there was a $7 ferry crossing.  Cool! 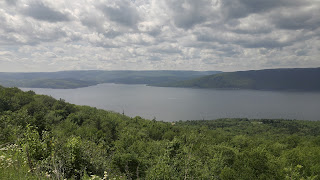 The view from our roof and windshield while waiting for the ferry to Newfoundland at Arm of Gold campground.  We had an unobstructed 180 degree view of the water.  This is a panorama, so it's a little hard to make out.