After our nice stay in the mountains of Pennsylvania, we headed back down to the coast to visit good friends Yancey and Kris in Ledyard (pronounced lejerd).  On the way there, we had a very brief, grotesque, and hilarious encounter with a buzzard.  It came swooping out of the woods from the left, right in front of the windshield.  It probably didn't see us, because it banked left back into the woods suddenly, but not before spitting out whatever roadkill it was eating.  Again, right in front of us.  At least the rotten meat didn't hit the windshield, only the front and down the side of the RV and our car we tow.  All's well that washes off with soap and water, right?  We stayed 4 days at the Horvath residence, nice weather for most of it.  While we were there, Yancey took me to the nearby Groton Submarine Base to tour the Nautilus, our first nuclear sub.  We played trivia at The Spot, and checked out Foxwoods and Mohegan Sun casinos nearby.  They've got a big stone fire pit in the back yard too, which made for nice warm evenings under the stars.  Thanks to Yancey and Kris for a great visit to coastal Connecticut! 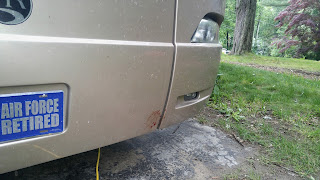 Nice, red splat of roadkill.  The red streaks going down the side were less obvious... 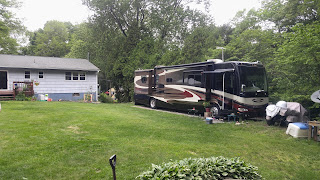 Kris and Yancey are friends we made in Florida RVing.  This is their rig in its frequent summer home out back.  We were parked beside the house.  Parking, power and water for two RVs, pretty slick! 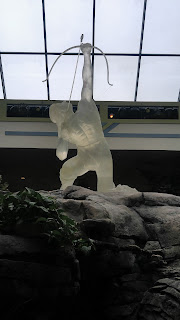 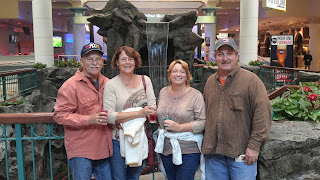 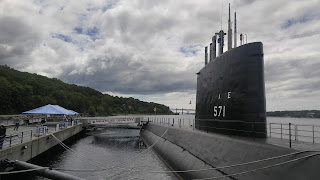 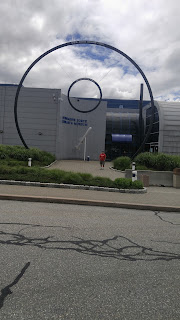 That's me in the red T shirt.  I'm standing outside the sub museum under a "rib" that forms the frame of a submarine.  The big one comes from one of our ballistic missile submarines.  Huge! 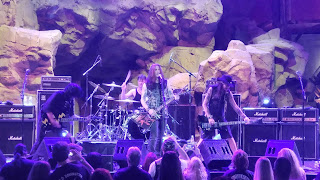 At the Mohegan Sun casino, they have free concerts pretty much every night.  This is the band "Autograph."  These guys were a minor success for a short time in the 80's, two of them on stage are original members