Victoria is the provincial capital, down at land's end on the southeast coast of Vancouver Island, right across from Vancouver (the city) and the Seattle megaplex.  It's the biggest town we've been in for a while, a little crowded, but very scenic and clean.  We spent a couple days there, no where near enough to see all they had to offer, so we'll be back.  We drove took a couple scenic drives, and visited two landmarks: Butchart Gardens and Craigdarroch.  Butchart Gardens was created by the wife of an industrialist within a rock quarry near their home.  What a transformation.  They had before and after pictures from 100 years ago until now and she was a visionary (with help from landscaping architects).  It's one of the nicest gardens we've ever visited.  Craigdarroch (kreg duh roke) is one of those large stone Victorian mansions that were built at the height of the industrial revolution in the late 19th century.  This one reminded me a lot of the Oliver Mansion we visited in South Bend, IN.  He's the guy that got rich inventing a better steel plow.  It wasn't, but it easily could have been the same architect.  Craigdarroch was built by a Scottish immigrant that made it big in coal on Vancouver Island.  He died before it was finished, and when his widow died the estate sold pretty much everything in it.  They're gradually buying back all the auctioned possessions as they find them.  Victoria's waterfront district and China Town looked awesome, but we only saw them as we were driving to the ferry landing.  We took a choppy 1 1/2 hour ferry ride over to Port Angeles, WA.  That's our last boat ride for awhile.  We took 5 total ferry rides with the RV this summer (Yukon River, Haines to Juneau, Prince Rupert, Port Hardy, Port Angeles) after having only done it once before when we crossed Puget Sound back in 2013.  It was an interesting way to travel and it cuts off a ton of miles, sometimes allowing you to go where there's no roads or bridges.  Here are a few pictures from Victoria. 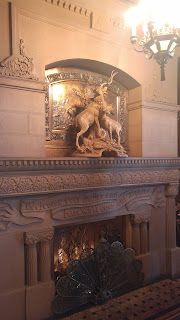 The fireplace in the foyer  at Craigdarroch.  Hand carved stag clock was original. 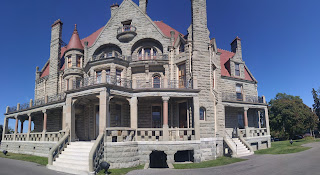 They let people park too close.  I had to get a close in panorama to avoid them.  Craigdarroch had fallen into disrepair when it was renovated to original condition in the 60's.  It had been used as a wartime hospital in the 20's, a college, the school district HQ.  They did a great job on putting back to close to original condition and putting in a lot of period correct, if not original, furniture. 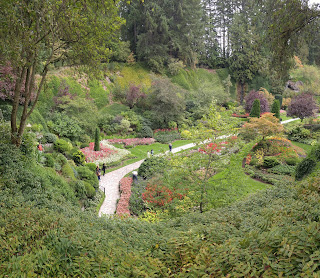 The Sunken Garden at Butchart Gardens.  This was once a completely barren limestone quarry. 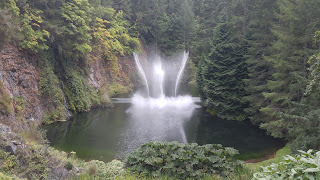 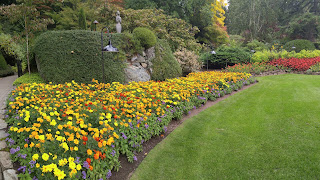 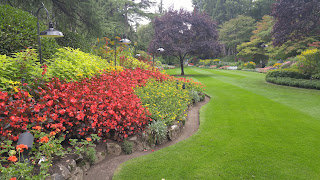 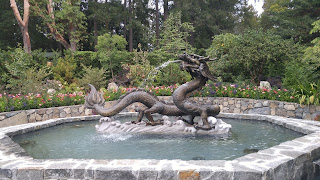 There's a large Asian influence in this area, reflected in the design of large portions of the Garden including this dragon fountain.  We heard more Chinese being spoken by tourists here than English. 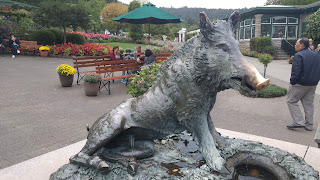 Woo pig sooie!  This isn't an Arkansas Razorback, but it might as well be.  Rubbing the nose for good luck keeps it nice and shiny.