The hits just keep coming.  After Telegraph Cove, we headed a little way down to coast to the big city, Campbell River.  I say big city because they have not only a Walmart, but a Canadian Tire.  We were lucky enough to reunite with new friends Ray and Linda who we had met briefly earlier in the summer in Prince George, BC on Canada Day.  Ray gave me his card and said look them up when we get to the island, so we did.  He'd been feeding me advice on Vancouver Island since before we arrived at Port Hardy.  They very graciously took us for a tour of the local area on Saturday, then came over for steaks on the grill at the RV on Sunday afternoon.  It was so nice seeing them again and cementing our friendship.  After our 2 days in Campbell River, we crossed the island to the west coast to see the Pacific Rim National Park.  It's awesome over here, a lot like coastal Oregon.  Along the way to Ucluelet, we stopped and saw the Cathedral Grove and its ancient Douglas Fir trees.  Over here, the giants are Sitka Spruce, Red Cedar and Hemlock trees, 10 feet thick and some 500 years old.  In the morning we're headed for the provincial capital, Victoria, where we'll catch the ferry over to Washington State on Saturday.  Here are some pictures from central Vancouver Island. 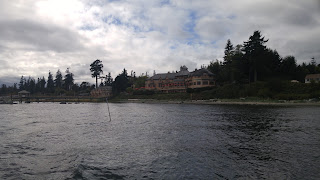 Ray and Linda have lived in Campbell River for years and shared their local knowledge with us.  The first cool thing was taking the free water taxi to April Point Lodge on Quadra Island instead of paying for the ferry.  In the short ride over, we saw yet another humpback whale.  This is Painter's Lodge, where we caught the ferry. 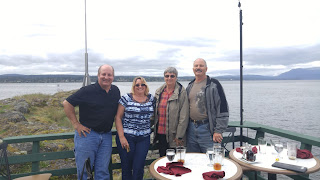 Lunch with Ray and Linda 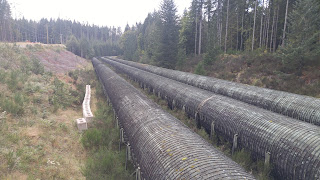 These are wooden water pipes, probably 10 feet in diameter, carrying water from a nearby reservoir to the power generating stating.  The rings are stays, like they wrap around a barrel to keep it from exploding.  We saw one leak spraying a little jet of water up about 2 feet, so they were full of water under pressure. 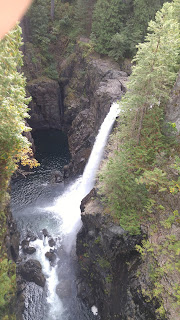 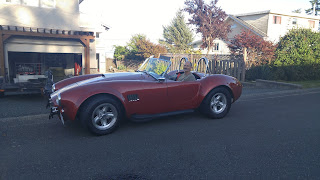 Ray's a hotrod enthusiast.  He built this 427 Cobra kit himself.  What a ride! 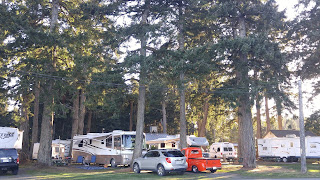 Our campsite in Campbell River.  That's Ray's other hotrod, a lowered '49 Ford pickup, in front of our RV.  Nice trees.  We really got lucky with the weather too. 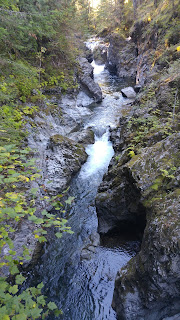 On our way from Campbell River to the coast, we stopped and took a nice loop hike around Little Qualicum Falls Provincial Park.  This is one of the many cascades you see on the trail. 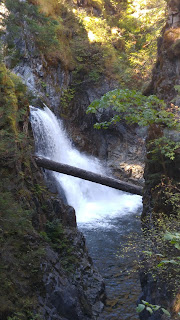 Lower Falls on the Qualicum River

Another stop we made was at a place called Cathedral Grove.  It's a nice loop through some old growth Douglas Fir trees, the oldest and biggest was 800 years old.  Here's one I photographed in vertical panarama mode.  The tree's probably 10 feet thick, I don't know how tall but it was way up there. 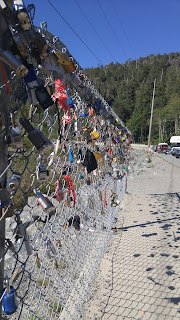 This was a cool little pull off.  The attraction was a diving pool in a neat little rock canyon, but there was a fence with a thousand or so locks attached to it.  I asked somebody and they're "love locks."  You profess your love and then lock it away.
http://kaitsquirks.com/2015/love-locks-on-the-pacific-rim-highway/ 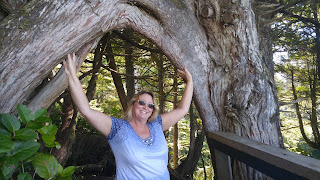 In Ucluelet, there are a lot of hikes through old growth and wind-tortured trees.  Here's Laurie in a natural archway formed by one of the trees closest to the water. 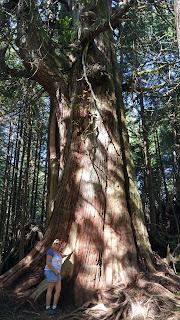 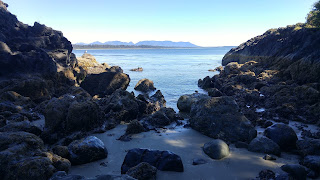