Rain, rain, rain.  Seattle's got nothing on BC.  Prince Rupert is at the end of the road, up a long, sheltered inlet.  We took a couple of scenic drives, but it was pretty gloomy while we waited on our ferry reservation.  The "sunny" point of the trip was seeing a friend we made earlier in the summer on our way north to Alaska.  Kris and her friend Patsy were camped at the park we were at in Kitwanga, back in early July.  We sat out with other campers under their awning, and of course I provided musical entertainment.  Kris lives in Prince Rupert, and we were lucky enough to meet her family and she entertained us on her deck and fed us a home-made dinner.  Thank you Kris (Kerstin) for your hospitality!  Other than that, we drove inland a bit to see the town of Terrace and the village of Kitimat with its grove of giant spruce.  The ferry ride to Port Hardy on the northwest end of Vancouver Island was awesome.  We had to check in at 6am and we didn't disembark until midnight.  Unlike Alaska Marine Highway ferries, which are basically a troop transport vessel, BC ferries are swanky.  We paid a little extra to sit in reclining seats in the Aurora Lounge up at the front of the ship.  We had reclining leather seats right in front of a floor to ceiling window.  The cafeteria was nice as well, and they showed a couple movies in a little theater.  We saw several humpback whales along the way, and stopped at a little village called Bela Bela where they were snagging salmon all around the boat.  We got off the ferry in Port Hardy and stayed for a couple nights.  The north end of Vancouver Island is pretty rugged without a lot of development.  We drove around the gravel roads checking out the scene.  A mother black bear sow and her cub were in the road when we came around the corner.  The mom went right and the cub went left.  I'm sure they reunited in the woods somewhere.  They're still logging old growth redwood trees, and a logging truck as big as a house came around the corner at us.  I pulled over, but the truck's trailer still hung over the roof of the chevy.  Scary.  The biggest logs he was carrying had to be 6 or 8 feet thick.  Not huge by redwood standards, but then again, they've cut all the big guys down already.  We've made our way down the coast a tad, now at Telegraph Cove, a cute little resort and marina with historical buildings on the water.  Here are some pictures of BC so far... 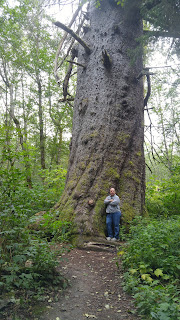 The giant Sitka Spruce in Kitimat.  The top had been blown off by lightening a couple centuries ago, but it's still alive.  I can't believe somebody can look at a tree this size and see dollar signs. 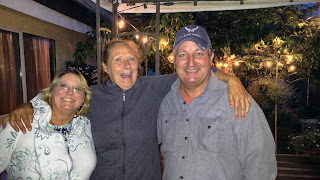 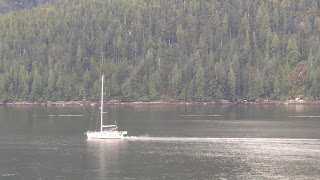 The ferries do a great job of taking advantage of the protected waters afforded by all the islands along the northwest coast.  So do smart sailboat owners.  There isn't a lot of reliable wind in the Pacific Northwest, so you do a lot of motoring.  Here's somebody headed south on a nice boat.  Mexico? 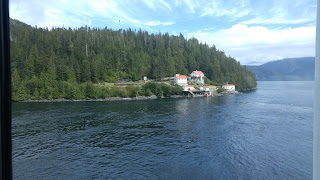 One of several lighthouses they still man along the inside passage. 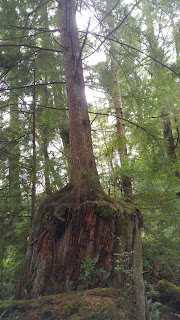 Pretty weird.  This was on a hike Laurie and I took while in Port Hardy.  The stump is about 12 feet thick, probably cut over a century ago.  The tree growing out of the stump was big by normal standards.  You see this sometimes up here.  A tree will send roots down the side of the cut stump or fallen tree.  Then, the old dead tree rots away leaving some crazy looking root structures.  Nature at its best. 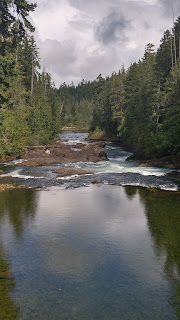 Marble River.  We saw at least a dozen 3-5 lbs trout from this bridge.  Whoppers compared to the little trout I've caught. 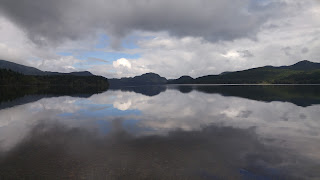 Just a scenic lake in BC, so calm it's like a mirror surface.  Yes, that was a patch of blue sky.  We had one really nice day in Port Hardy.