Our next stop down the coast was Telegraph Cove.  We stayed there a couple nights.  It's a tiny protected cove that at times has been a lumber mill, fishing camp, and telegraph station.  They took it over for WWII, like pretty much everything else around here.  All the waterfront buildings were bought by a resort company that uses them either for vacation rentals, restaurants or shops.  There's also a whale interpretive center at the end of the boardwalk.  Their largest display was the skeleton of a fin whale (like we saw in Seward, 2nd largest only to the Blue Whale) that had been rammed by a cruise ship and stuck between that big bulb and the hull.  Killed it of course.  They saved the skeleton for display.  It's a cool little area, great stop for a couple days.  We're now in Campbell River (a Walmart town!).  Here are a couple pictures from Telegraph Cove. 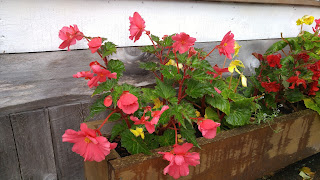 Begonias?  I just thought they were pretty. 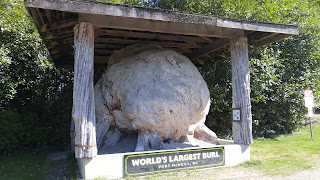 A tree tumor from a 500+ year old Sitka Spruce.  They've cut pretty much all the big, old trees on the island.  We stumbled upon the largest burl in the world.  I always thought it was Burl Ives, but I was wrong. 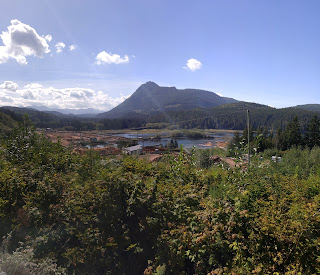 One of many lumberyards we saw.  Some of the trees were 6 feet thick, but they must be way up in the hills because we never saw them. 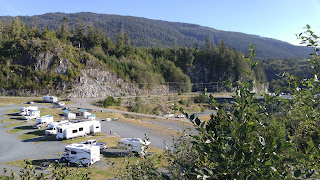 The RV park overlooking Telegraph Cove.  That's our motorhome at the very top of the park, near the cliff.  Nice view. 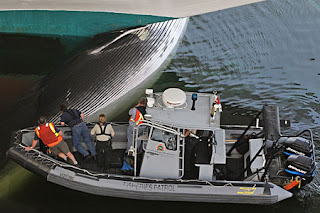 I downloaded this picture from the Internet.  It shows a dead fin whale still stuck in the cruise ship. I'm not positive it's the one in the Telegraph Cove museum.   Apparently this happened more than once, I'm seeing multiple stories on the Internet.  Gives you a visual of what happened, though.

Another downloaded picture.  This must have been taken from the air.  Telegraph Cove Resort owns all the buildings to the right.  The whale interpretive center is in the big red building in the lower right corner.  Our motorhome would be just out of frame to the left.