We left the Columbia River Gorge and headed north on a mission.  We didn't stop for any sight seeing in Washington, because it's time to stop dilly dallying.  So, we camped at a cool little overnight municipal campground in Omak, WA so we could make "one last Walmart run" before heading into Canada.  Funny, because I've probably seen half a dozen Walmarts in Canada.  Anyway, the border crossing was uneventful.  We talked to the border guard, nice young man, for probably 5 minutes while the computer ran a background check on us or whatever it does.  He was mostly concerned about guns.  With us being from Florida, the assumption is you're packing.  He even asked if I had a concealed permit.  He also asked about fresh fruits and vegetables, but it was a very low threat entry into the friendliest "foreign" country in the world.  Our first stop was in BC's 2nd largest city, Kelowna.  It's not far across the border, and is a very nice tourist town on Okanagan Lake.  We stayed for a couple nights to get our bearings, then headed up highway 97 to the next town, Williams Lake.  They have a nice campground on their dedicated rodeo (stampede) grounds.  The stampede was the coming weekend, but again, no dilly dallying.  We spent one night at the campground, looked around town some, then moved on to a couple nights in the next good sized town, Prince George.  This is a college town, again, with all the comforts of home.  We were lucky enough to celebrate Canada Day in Prince George.  It was a very multi-cultural affair, and in a beautiful park.  There's a distinct lack of junkiness that you see in American rural areas.  So far, BC has been no more remote than any place out west in the states, in some ways less remote.  So far, that is.  As I type, we're in Kitwanga, BC which is pretty far west and getting to be pretty north.  We've got a 450 mile trip up the Cassiar Highway to get to the Yukon Territory, but I think this is where the trip really starts.  We saw towering snow capped peaks coming into town, and the rivers are getting bigger and wilder.  We did see a bear running across the highway just in front of us today, which was cool.  Laurie saw a deer as well, but the many moose warning signs have, so far, been for naught.  One thing I am noticing is a lack of "scenic overlooks."  We've seen a lot of very pretty vistas, but I guess there are so many that the highway department here doesn't make a habit out of scenic view pull offs.  The rest areas are routinely placed in great locations, like on a lake or stream, however.  Here are some pictures so far: 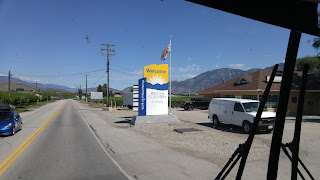 Woohoo, welcome to BC!  I'm going to have to buy the Canadian provinces sticker map for the RV now. 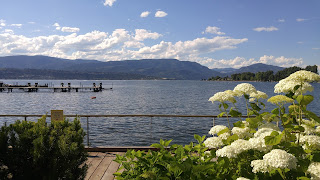 Lunch view on Okanagan Lake.  We had really warm weather the past week or so, glad it's finally cooling off. 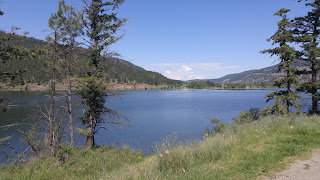 This is very typical of the rest areas in BC.  They choose a nice looking spot where the highway passes a stream or lake and make a wide spot.  Voila, ham and cheese sandwiches with a million dollar view. 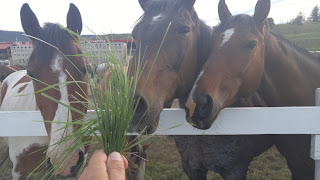 These guys were in a pen getting ready for the upcoming weekend's annual "stampede."  I'm thinking that's just Canadian for "rodeo."  Anyway, their paddock was way over grazed so I offered them some of the fat green grass just outside the fence.  Hmm, who wants to be my favorite horse?   Kidding, I gave several a handful so there wouldn't be any fuss. 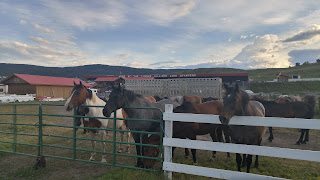 Wider view of the paddock with the seating area for the stadium in the back.  About 2 hours after I took this photo, we got pea sized hail for about 5 minutes.  Laurie and I were watching the show out the front window of the motorhome, they were all stampeding trying to get away from the hail. 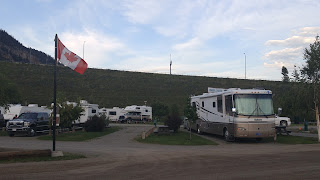 Yeah, our motorhome next to the Canadian flag. 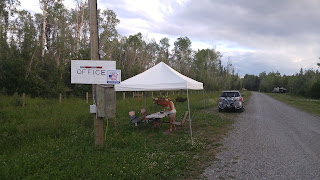 This was our campground "office" in Prince George.  It was a simple affair, $12 a night for a full hook up, and the owner was great. 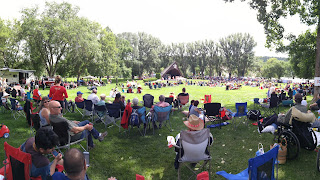 The Canada Day (July 1st) celebration in Prince George.  We forgot our chairs, so we just walked around goofing on all the proud Canadians.  These are the friendliest people in the world.  And I've been everywhere so I know... 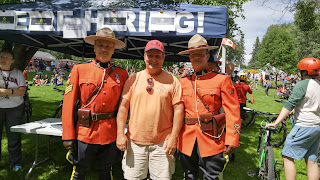 Me with two Royal Canadian Mounted Police.  How cool is that?  I grew up with Dudley Do Right as one of the Saturday morning cartoons, so I had to get a picture. 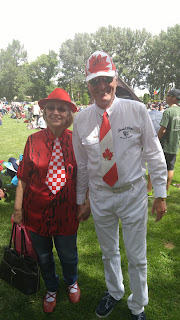