Shingletown, CA (Note: Post got stuck in drafts, posted out of order)

Last summer on our way back south from Oregon, we stayed out side of Redding, CA basically in the shadow of Mount Shasta.  We didn't get to see a whole lot of the area, so we spent a little more time this year.  Not that everybody's heard of Redding, but Shingletown is a tiny little berg full of quirky locals on the highway through the woods leading to Mount Lassen, Shasta's little brother.  We stayed at a KOA and had the coolest spot with patio furniture, fire ring, and a full size propane grill included.  It sure is nice sitting by the fire on a cool Northern California evening.  While we were there, we toured a wild pony rescue ranch, hiked through some caverns, played at open mic night and just generally had a nice relaxing time.  Here are some pictures: 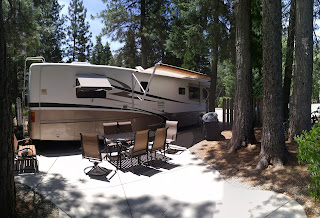 A panorama of our spot at the KOA.  You pay a little extra, but wow the site sure was great, and private. 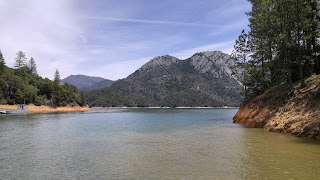 This entire cove was orange clay when we came through last year.  The California drought was so bad the lake was down over 100 vertical feet from this year. 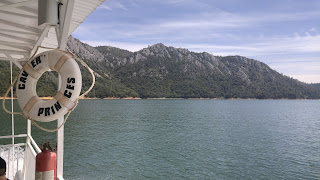 A view from the boat on our way to Shasta Caverns.  It was a nice little ride, and the caverns were very well preserved considering that they've been a commercial venture since their discovery. 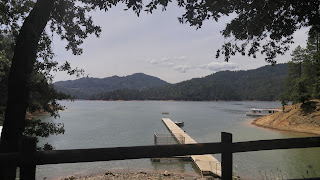 Just another view of a boat dock on Shasta Lake. 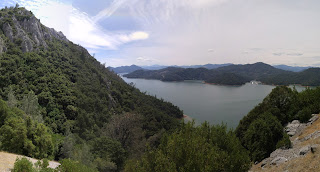 Panoramic view of Shasta Lake right before you enter the cavern. 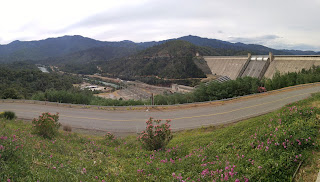 Shasta Dam on the Sacramento River.  2nd largest dam in the US, behind Grand Cooley. 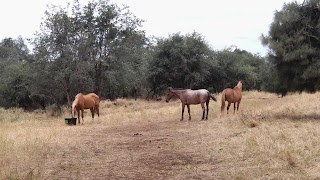 Actual wild ponies.  They don't try to train them or anything, just make sure they're fed and have thousands of acres to run around on. 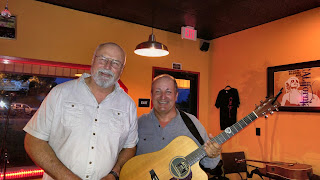 Last time we were in the area, I played at an open mic night at California Brewing Company.  Great to do it again.  This is me with Hal, the host.  I got to jam again with Richard on harmonica, so much fun.