Well, as promised, this is where the real adventure begins.  Southern BC is beautiful, but it's pretty civilized compared to the far western reaches of the province.  Leaving Kitwanga (which is a lot of fun to say if you do it like a sound effect) we really started to see why the license plates for this province say "Beautiful British Columbia."  We stopped for photos quite often along the Cassiar (Canada Highway 37), but we overnighted in Stewart and Iskut.

Stewart is a small port town on a fjord that projects up all the way from the Pacific.  It's at the end of highway 37A, which considering how remote it is, was a very nice road.  Along the way, you come around a corner and are greeted with the sight of Bear Glacier, just across a lake from the road.  We've seen so many black bears now, I can't remember if we saw one on this spur or not.  We have seen black bears, a huge bobcat the size of a Labrador retriever, bald eagles, and a moose.  This was all on the Cassiar at some point.  Back to Stewart.  It's a cool little town on the Alaska border, back in there where Alaska forms the coastline.  The US town of Hyder, AK is right there with it, and you drive through Hyder to get to the coolest thing we've seen so far, the Salmon Glacier.  The drive up to the Salmon Glacier is on a working gravel road up into the mountains, a little steep and winding but man worth the trip.  We spent 2 nights at the Bear Creek Campground in Stewart, very nice.

The next day we continued north to Mountain Shadow RV Park in Iskut.  Iskut is a whistle stop, but the campground is a slice of heaven.  They had good satellite WiFi, so we spent a couple days chilling out and I got a lot of school work done on our down day.  We didn't go anywhere, just hung out and relaxed/worked.  It was great.  The bald eagles were flying around the whole time we were there.  We made some new friends at an impromptu jam session at our campsite.  Sunset isn't until around 11pm here, so there's plenty of time after dinner for sitting around gabbing.  Which way you headed?  How were the roads?  What'd you do for fun?  This community of nomads we belong to is a hoot.

The road condition deteriorated a bit the further we got up the Cassiar, but it's still pretty good, you just have to take your time through the gravel.  A little trivia I didn't know, BC mines like 90% of the jade in the Cassiar Mountains.  We stopped at Jade City, where the family that does most of the mining has a store, and bought a couple pieces.  I got a raw piece about the size of a smart phone for $5 that I'd like to have made into something.  They mine 100 tons a year in huge boulders and export half of it.  You could have jade counter tops if you were so inclined.

We drove through miles of territory that had burned pretty bad in forest fires in 2010 and 11, but for the most part this area is just incredibly densely forested.  I wonder what the total value of the usable timber in BC is.  It's got to be kajillions of dollars.

As I type, we've made it to the end of the Cassiar Highway and are in Watson Lake, Yukon Territory!  Here are some pictures... 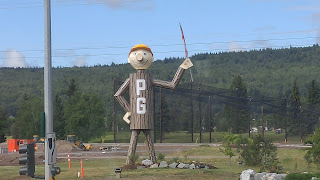 Oh, I left this out last update.  This is PG, the mascot of Prince George, BC where we spent Canada Day. 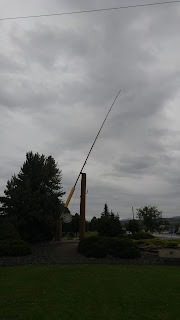 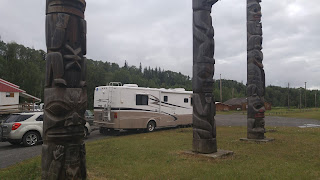 One of our short side trips off the Cassiar, Gitanyow BC.  Its claim to fame is totem poles, dozens of them. 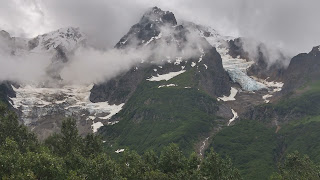 I guess I just thought this was an awesome view.  It was generally very cloudy close to the coast, just the kind of Pacific Northwest weather you'd think would be there. 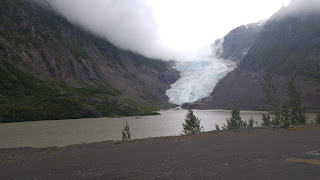 Bear Glacier, from the road leading to Stewart. 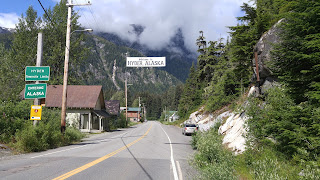 You have to cross into Alaska on your way from Stewart to the Salmon Glacier.  This does not count toward the Alaska sticker for the RV.  We took the Chevy, so it doesn't count.  Interesting little town though, so remote. 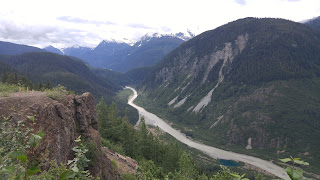 This is the Salmon River, pretty much totally fed by the melt water from the Salmon Glacier.  Looking back down the valley from the road up to the glacier. 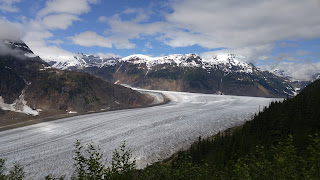 Click on this one.  As I'm always saying, the pictures just don't do these view justice.  At the top of the picture, it looks like the glacier is coming from the valley up and to the left.  It is. 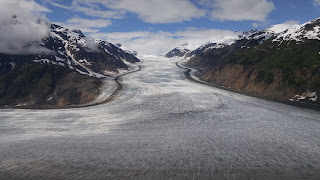 Here we are at the end of the line.  Only work trucks extending the power lines are allowed further up the valley.  The Salmon Glacier is about 500 feet thick and goes on for about 12 miles before it turns into the ice field up in the mountains. 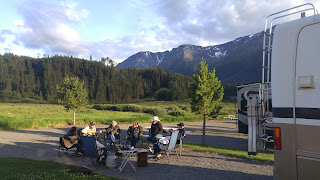 Mountain Shadow RV Park jam session.  We were pretty chilly, huddled around our propane fire pit and wearing jackets.  This picture was taken at 9pm, and we kept going in total daylight for another couple hours. I could read my songbook with no extra light all night. 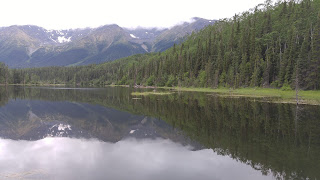 Down the hill from the RV spots at Mountain Shadow, they own lakefront property.  This is where the bald eagles were flying and fishing while we were there. 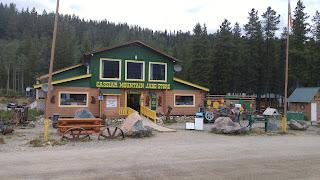