The Yukon has proven to really be remote.  The roads are rougher, the rivers wider, the wide open spaces even more wide open.  Sometimes we'll crest a ridge and be presented with what seems like 100 miles full of trees in every direction.  I'm sure they've logged up here substantially for years, but it's still amazing how much forest they've got.  Watson Lake was just a stopover.  We watched a cool domed ceiling immersive movie on the northern lights (probably as close as we'll get this summertime trip), went out for dinner, and toured the world famous sign post forest.  Up early the next morning, it was time for a day on what used to be called the ALCAN, now just the Alaska Highway.  It's just not the adventure it once was.  You have to slow down for the well marked pot holes and poorly patched areas, but making about 50mph all day is no problem.  That gives you time to take in the scenery anyway.  We got to the provincial capital of Whitehorse for 3 days in the big city (WiFi, cell phone service, and Walmart).  Whitehorse was one of the major stops on the way to the Klondike gold fields, and was also important in the building of the ALCAN during WWII.  It's a pretty good sized town with all the comforts of home.  If your home is dark 6 months out of the year and gets down dozens of degrees below zero.  We're traveling in high summer, so it's actually a little hot.  We've seen 90's and with the sun being so intense, it's actually pretty nice when the sun dips down a little and it cools off.  It never really gets dark, maybe for a couple hours in the middle of the night.  While in Whitehorse, we went to several museums.  They had a great one that explained Beringia, the now submerged Bering land bridge that was dry for thousands of years before the last ice age melted.  Another good one was the Transportation Museum.  They had to get pretty inventive to move people and cargo around up here over the years.  We also toured one of the larger stern wheel steam boats they used from about 1900 to the 1950's to transport people and cargo between Whitehorse and Dawson.  It's hauled up on the bank, just like they used to do every fall when river ice threatened.  We spent 3 nights total in Whitehorse, and even had time for a relaxing evening by the campfire.  Our spot at Pioneer RV Park was nice and wooded, really private, but with water, electric and even cable TV.  After 3 days, it was time to head north on the Yukon Highway to Dawson City (not to be confused with Dawson Creek, much further south in BC).  Dawson has been a hoot.  This is the town they built when gold was discovered nearby in a little stream that feeds into the Klondike river, which in turn meets the mighty Yukon river.  We took in a Can Can show (touristy) and a few more museums about the last great gold rush in North America.  The gigantic dredges they used to process gold bearing riverbed gravel left these incredibly long, high piles of rocks everywhere up the Klondike River Valley.  From the air, it's a mess, but the trees and bushes are taking over and in another hundred years you probably won't even be able to see it.  We also took a side wheel tour boat ride on the Yukon river.  It was interesting seeing the town from the river and hearing about all the history.  We steamed up to where the Klondike flows into the Yukon and saw a native American (1st Nation as they're called up here) village on the bank.  They're not hurtin'.  There's no bridge across the Yukon here, so tomorrow we catch the ferry to the other side and head on toward Alaska.  We'll likely overnight shortly after the ferry ride to get a nice early start on the Top of the World Highway.  Sometimes the line of cars waiting to get on the ferry can be pretty long, so we're not getting in a hurry.  Ever.  Some pictures from our time in the Yukon Territory: 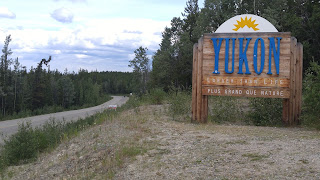 Woohoo, our 2nd Canadian Province.  I guess we'll have to buy the Canadian extension of the sticker map now.  This was at the northern end of the Cassiar Highway, a very scenic drive. 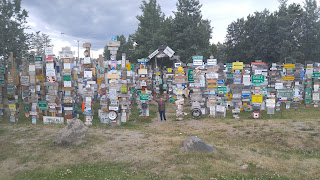 That's Laurie in the midst of the Watson Lake Sign Post Forest.  People come from all over the world and leave signs.  It's a lot of license plates, but also a lot of custom signs of towns or things like our little custom welcome sign we put out front of the motorhome.  Some people went to great lengths to bring something cool to leave behind.  Laurie read there are something like 85,000 signs. 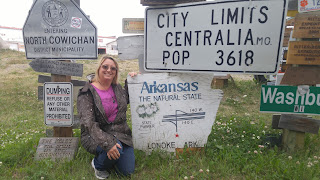 Laurie's not the first Razorback in Watson Lake.  Lonoke is just outside Little Rock. 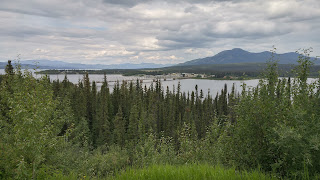 Nisutlin Bay Bridge over the Teslin River.  This is the longest bridge on the Alaska Highway. 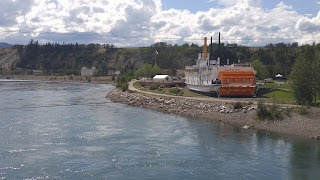 The SS Klondike, perched where they last hauled her out on the banks of the Yukon River, Whitehorse. 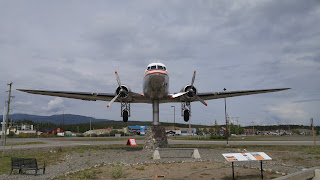 At the Yukon Transportation Museum.  This old DC-3 "Goonie Bird" is the worlds largest wind vane.  In only 4 knots of wind, it will spin to face it.  It works, we saw it.  They did some pretty good engineering to balance it that well. 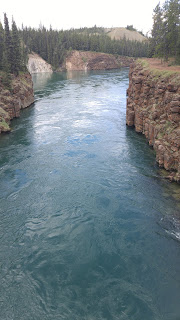 Miles Canyon on the Yukon River.  Just upstream from Whitehorse. 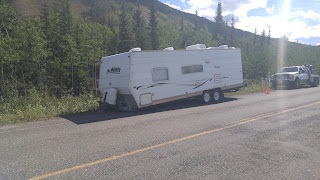 Okay, this is one of only 2 accidents we've seen caused by road hazards.  This fellow went over a "frost heave" to fast.  The freezing and thawing causes the roads to get pretty bad undulations, but they're pretty well marked.  This was a particularly bad one that snapped the trailer's hitch.  The other accident was a work truck hauling a cargo trailer that was way off the side of the road on a curve, overturned in the bushes.  Not sure what happened with that one, the scene was empty and just marked with an orange cone. 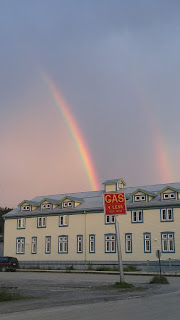 Okay, 1130pm in Dawson City.  We were walking back from the Can Can show and were treated to a double rainbow that was about as intense as any I've ever seen.  The base was particularly bright.  Almost midnight, normally too dark for rainbows right? 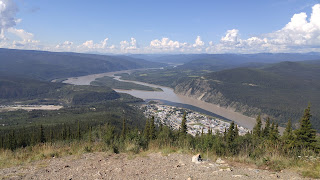 Dawson City as seen from Midnight Dome.  The bright splotch at left is where they dredged up gravel from the Klondike Valley and just left it there. 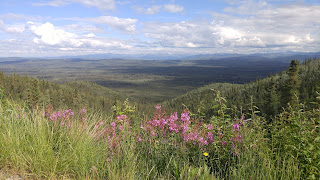 The Tintina Trench from the Alaska Highway.  One of the many geological structures caused by the glaciers up here. 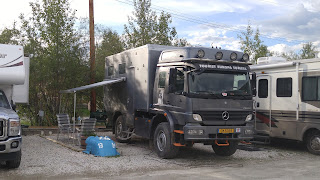 This guy is going from the Artic Circle to the tip of Argentina.  Looks like a tank, but pretty trail worthy.  You see all manor of rigs up here, from high dollar Class A diesel coaches to ratty old Class C motorhomes from the 70's.  There's something for everyone.

Dredge #4, now a National Park of sorts.  These machines would float on a little pond in the river and scoop in tons of gravel down to the bedrock, run it through a sluice to shake out the gold, the spit the useless gravel out the back into a long pile called a "tailing."  It floated, so it was easy to move up stream after it had dredged a section.  The tailings go on for miles as they work the dredge up the river valley. 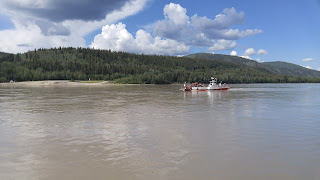 The ferry that will (hopefully) carry us over the Yukon river and on to Alaska.  I took this picture from the tour boat.