Oregon has become our favorite place out west.  We retraced our previous steps, this time from south to north.  Our first stop was a great little state park on the Rogue River, appropriately named Valley of the Rogue State Park.  Laurie found an open site on a weekend, huge luck for us which must have been because of a last minute cancellation.  The park is right off I-5 and our campsite overlooked the river.  We spent a couple nights there then moved on to McMinville, northwest of the state capitol in Salem.  The main attraction there, other than it just being beautiful and cool, is the Evergreen Air and Space Museum, home of Howard Hughes' Spruce Goose.  The flying boat from the '40s is still the largest aircraft to take flight.  They moved it from Long Beach, CA to central Oregon back in the 90's using barges.  It's just huge, you have to see it.  And though it's mostly birch and not spruce, it is virtually all laminated wood.  Our first night in the McMinville area, we tried a new form of camping.  We stayed at a winery up in the hills, as part of our new membership in Harvest Hosts.  We were treated like family and had a wonderful evening with the Kramer family at Kramer Vineyards.  The next 3 nights were at a conventional campground, really nice, next to the museum.  One of the highlights of this stay was getting to see an old military buddy from an assignment in Japan 15 years ago, Chris Molin.  After our stay in McMinville, we moved on to the Columbia River Gorge, just east of Portland.  This are is also phenomenal and we'll just have to come back.  We didn't even scratch the surface.  One of these summers we're going to spend the whole season in Oregon.  Here are some pictures: 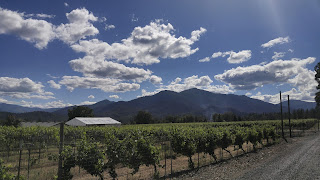 A common view in Oregon, vineyards and mountains. 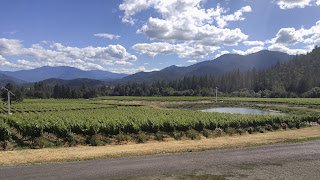 The Applegate Valley, near Medford, OR. 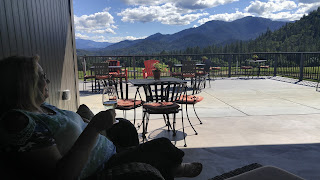 Laurie taking in the view on a perfect Saturday afternoon. 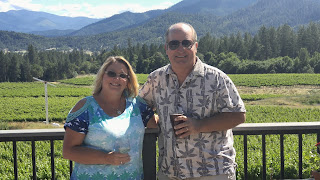 Intrepid travelers suffering through another dismal day of retirement. The view from our windshield at Kramer Vineyards. 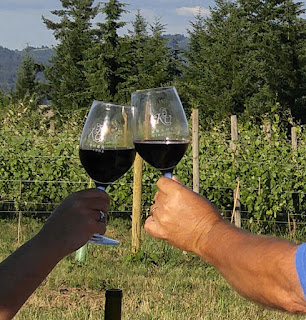 Cheers!  (Photo by Shantel, thanks!) 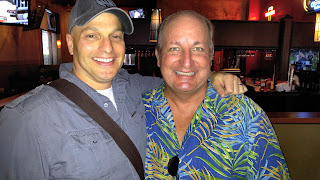 Chris Molin and I worked together at Misawa Air Base in Japan earlier in the century. 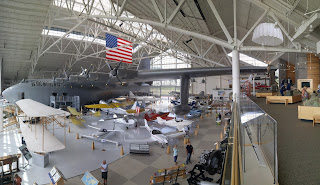 Hard to get it all in.  Enlarge this panorama I took and you can see the Spruce Goose and how large it is compared to all the other planes and objects in the museum. 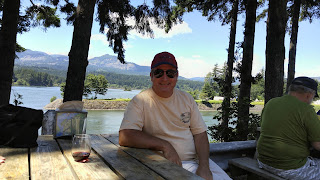 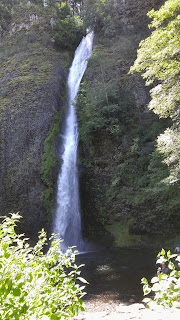 This is Horsetail Falls.  Like I'm always saying, the pictures don't do it justice.  It's around 175 feet high, but you can't really get a sense of the beauty from a photo.  You just have to see this stuff.  The most popular waterfalls in the gorge were packed.  There's one over 600 feet, but we couldn't get a parking spot near it.  That's what you get for being anywhere popular on a weekend. 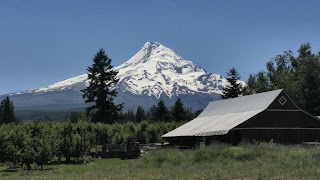 Mount Hood.  If you drive south up and out of the gorge, you see these Cascade Mountain giants.