When you're making miles on the interstate, you often pass little towns with nothing much to notice but a truck stop and a greasy spoon.  Laurie and I have found many times that if you stop and check it out, these little towns often have hidden treasures.  Ehrenberg was like that for us.  We stayed 4 nights over Memorial Day weekend and it was great.  We toured Joshua Tree National Park, hung out by the pool, went out for pizza and music, and of course relaxed in the high desert coolness.  I never paid attention until Laurie got a telescope for Christmas last year, but the planets are really visible in the evening sky lately.  We stargazed at Mars on the night of its closest approach, as well as Jupiter and checking out the rings of Saturn.  It's really clear and dark in the middle of nowhere!  Here are some pictures: 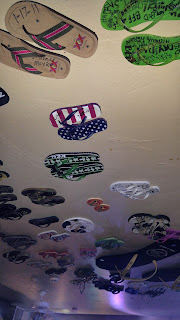 Some restaurants collect dollar bills written on them and stapled all over the place to commemorate your visit.  I've seen others that do the same thing with bras.  At the River Run Cafe in Ehrenberg, it's flip flops.  This looks like an upside down view of the floor, but it's the ceiling over my head. 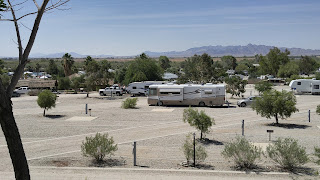 The Mighty Endeavor viewed from poolside at the Arizona Oasis RV Resort.  Hard to believe we've owned her for 5 years now, called her home for 4.  In the background, you can see the trees lining the Colorado River.  That's the big draw here on a long weekend.  The motor sports fans were zooming up and down the river all weekend, as well as putting around in their dune buggies.  Not quiet, but interesting and it's good to see working folks enjoying themselves. 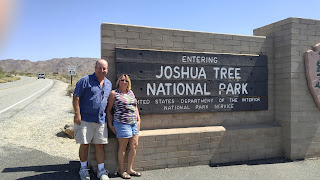 Intrepid travelers at the Cottonwood entrance off I-10.  It doesn't look like much from the interstate, but it was really pretty (in a desert sort of way) once we climbed up into the mountains.  We went in the Chevy.  Touring national parks in the motorhome just isn't as much fun. 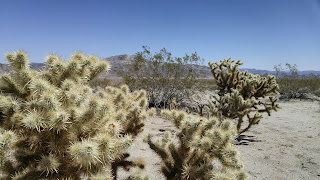 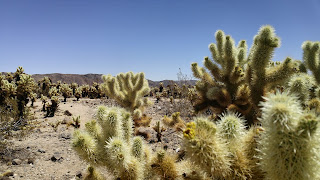 Another view of all the cactus 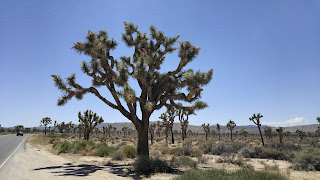 A Joshua Tree, found only in the Mojave Desert.  The trunk looks like an oak or something, but the top looks like a cactus.  It's actually a type of yucca, only pollinated by the yucca moth. 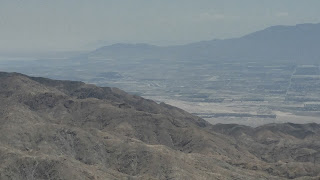 The view of Palm Springs and the Salton Sea from high up in JTNP.  The smog is courtesy of LA traffic.  It funnels through a pass into this valley. 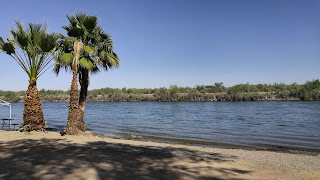 The Colorado River was flowing strong when we were at the Arizona Oasis.  I took this picture Monday, after most of the boaters had gone home.


We went out for pizza at the River Run Cafe, and they had a great guitarist/singer doing all kinds of country and classic rock.  Here's a guitar solo from the 80's.  Some will love it, to others it will be NOISE