In the summer of 2013, we stayed a week in Monterrey at the Naval Post Graduate School's campground.  It was a beautiful town, and we wanted to see the town at the other end of Monterrey Bay, so this time we stayed in Santa Cruz in a cool little RV park at the harbor.  We were looking out our windshield at the boat slips.  While we were there, we drove over the coast mountain road, 117, into San Jose for the day.  What a drive, like a racetrack.  We toured the Winchester House on one day, then checked out the sights around Santa Cruz the next.  With only three nights, we didn't get to see a whole lot, but it was very nice. 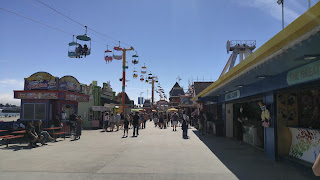 There's an old school boardwalk and pier in Santa Cruz.  A little touristy, but fun for a walk. 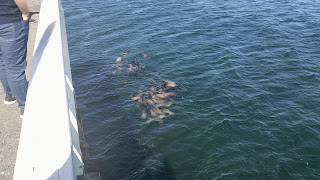 The sea lions were out in force.  They were laying all over the sub structure of the pier, and here's a big group just resting in the water. 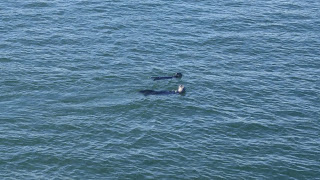 Hard to tell, but these are sea otters.  We saw them for the first time this trip. 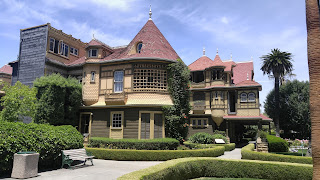 The Winchester House.  This is the one the lady kept building on willy nilly until she died.  It was sold and turned into a private museum right after her death and they've been doing tours ever since.

The front of Winchester House.  This door and view is probably the least crazy area of the house. 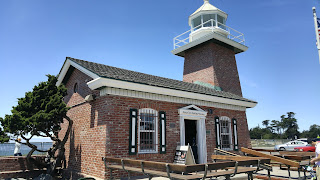 The California Surf Museum.  Really nice views of the coast from up here, not so much information on surfing. 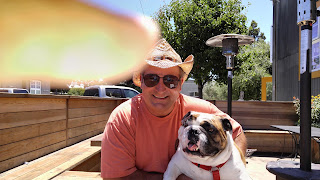 We had lunch at a dog friendly cafe.  This friendly dog became my new best friend.  Don't mind Laurie's finger in the foreground.

I took this panoramic view of Santa Cruz Harbor from the roof of the motorhome.  Very nice view for a few days.  The houses on the hill overlooking the same view cost millions. 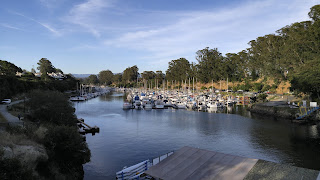 Another view of Santa Cruz Harbor from the railroad bridge.