Wow, what a difference a day's drive can make.  It was a hair raising (and I only have 3 hairs on top) drive through the outskirts of LA down to our beachfront reservation on Camp Pendleton, just north of Oceanside.  We had stayed here in summer of 2013 before heading back east.  It's beautiful.  There's just a ton of traffic no matter what you do, but we got down there with no drama.  Besides hanging out on the beach, strumming guitar by the campfire and such, we got to visit with old friends Mike and Jama.  They moved to Oceanside since we visited in 2013.  We go way back, and haven't seen them since our visit to Mountain City, TN back in 2012.  We forgot to take any pictures with them, unbelievable.  In addition to grilling burgers with us on the beach, they hosted us at their house in the hills for steaks on grill.  I had been nursing a slow leak in one of the tires on the Equinox we tow, and I took it to Discount Tires and they found a screw and repaired it for free.  Hard to beat that.  All in all, it was another great week on the beach in SOCAL.  Here are some pictures: 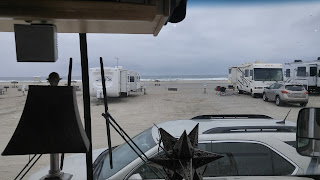 The obligatory windshield view.  There's just something totally cool looking at the ocean while you're sitting on your couch having your morning coffee.  A view like this would be several million dollars in this neck of the woods.  I'll take it for $40 a night, thank you. 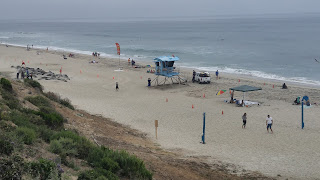 Mike and Jama took us to neighboring Carlsbad, CA for a walk along the beach on their fitness trail.  It goes on for a long way, overlooking the usual southern California beach scene of surfers, volleyball courts and families just enjoying the day. 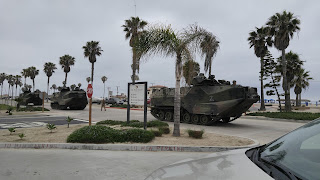 I was beginning to wonder if the Marines would put on one of their parades.  The morning we were heading out, they didn't disappoint.  Here they are in their amphibious armored personnel carriers, heading past the campground and out to the exercise area.  Pendleton is enormous, and they practice doing all kinds of Marine Corps stuff out there.  I'm just glad they carved out a piece of beach for recreation. 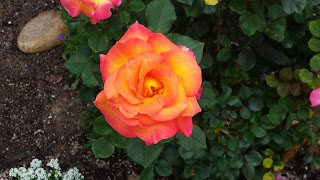 Jama took Laurie out for a girl's day, and Laurie snapped this perfect rose picture.  It seems plants grow like crazy out here if you only water them.  That's the rub though, not a lot of water to go around.