The Carolinas and Virginia

Man, I really need to blog more often, and definitely take more pictures.  After Savannah, we headed north one state to South Carolina to visit good friends Dave and Karla.  Dave’s been stationed at Shaw AFB the past few years working security cooperation and foreign military affairs.  I met Dave at CENTCOM, and we’ve been family friends for almost 10 years now.  He’s retiring and moving back to Tampa, so we’ll see them more often in the winter from now on.  We spent two days in the woods at Poinsett State Park, very nice, before moving on to Virginia Beach.  I didn’t take a single picture!  It was great to meet Stephanie’s beau Kevin, and Laurie got a special Mother’s Day meal prepared fresh in the kitchen.  Kevin and Steph do a lot of cooking with organic, fresh ingredients, so we came back the next day and mooched another meal.  Steph and Kevin are great together.  After Virginia Beach, we had a very narrow window of opportunity to see Keith and Abby up in Dahlgren, VA.  We met them when Keith was working with CENTCOM a few winters ago, and I posted a picture of them in my Winter 2015-2016 post.  Of course, they’ve had another baby and I didn’t take a single picture!  They live on the Potomac, and were courteous enough to buy a house we could park behind.  We stayed two nights and had a wonderful visit before moving on to a couple nights of serenity at a lakefront spot on Kerr lake at a Corps of Engineer park.  Bliss!  However, we were just waiting a couple days before moving on to Raleigh to see John and Phyllis.  We had a great visit with them, and left them a parting gift of a giant hole in the yard when I found the only soft spot left after days of constant rain.  A little drama, but an hour and an assist from the tow truck later we were on the road.  Sorry about the crater guys!  They always take such good care of us.  After Raleigh, we moved to a very nice campground, Cherry Hill RV Park, just outside Washington DC in Maryland.  We haven’t spent a whole lot of time on the national mall, having visited before, be we were fortunate enough for several reunions.  Joel and Jenny were neighbors in Japan and great friends, and they hosted us for World Famous Homemade Pasta at their house in Alexandria.  Dan and Marlee were friends from way back in California at Vandenberg.  He’s now a project manager at the Johns Hopkins Applied Physics Laboratory.  We met them for dinner one night.  Jeff Styers was able to come to the motorhome, but unfortunately Peggy is in Canada.  Poor planning on our part.  It’s been raining almost every day since we arrived in Virginia Beach weeks ago.  I’m sick of it!  It’s great seeing people and the green trees are great, but I think this is why we tend to spend summers out west.  Here’s some pictures of the last couple weeks: 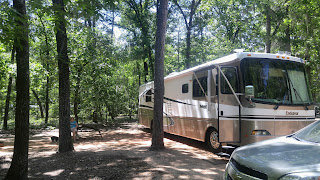 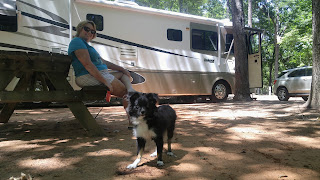 Missy is getting bigger, exploring absolutely everything she sees and hears. 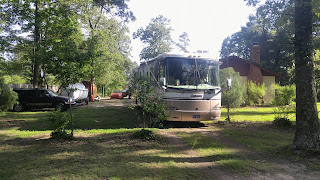 Keith and Abby let us park in the back yard, plugged into electricity.  So nice when friends have RV parks at their houses! 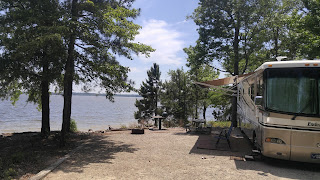 Lakefront on Kerr Lake in Virginia.  The dam is just out of frame to the left. 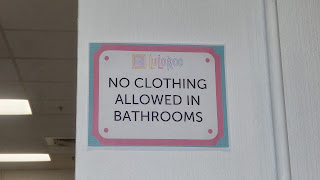 This was at the North Carolina agriculture expo we went to with John and Phyllis.  I asked a fellow standing outside if he'd hold my clothes while I went in. 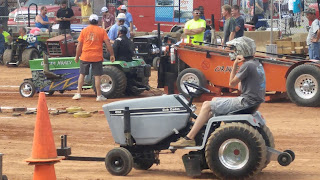 They were running a lawn tractor pull at the expo, great fun in the mud. 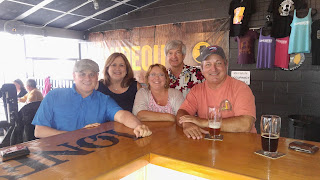 Rich Canfield, Phyllis, Laurie, John, and me.  Rich is an old friend of the Perrys, but a friend of ours too for years now. 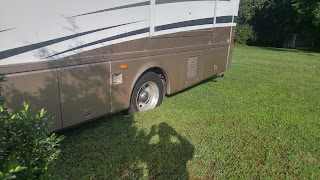 I didn't spin the tire or anything, just sank into the one clay area in the Perry's front yard.  Whoops!  A tow truck winched us out no problem.  It's always something... 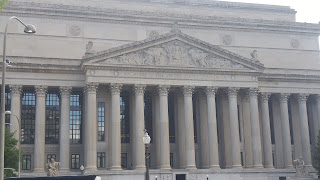 We went to the National Archives to see the founding documents, really cool but they're really faded. 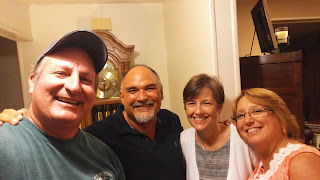 A selfie with the Schmicks.  Joel and Jenny were across the street neighbors for years when we lived in Japan.  Great folks. 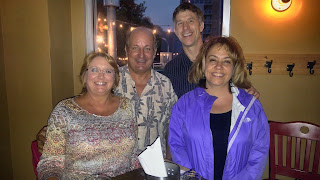 Us with Dan and Marlee Franzen.  Dan and I were young co-workers in California in the late 90's.  Both just old retired guys now!  Marlee runs maintenance at the water department. 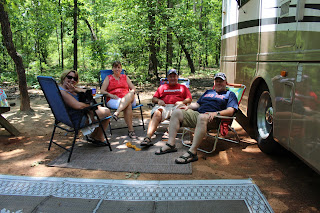 Chillin' Sumter style with Dave and Karla.  We had a couple days of good weather for this visit, so you take advantage.