The only context I had for Valdez, AK was the Exxon Valdez disaster.  It's a lot like the other port towns we've visited up here, rugged and more about work than tourism.  The drive down to Valdez is a spur, so we have to retrace our path for about 115 miles to get back on track, but it was worth the drive.  From our campsite, you can see at least a dozen separate glaciers.  We hiked up to the base of one, awesome.  Here are some pictures from the area. 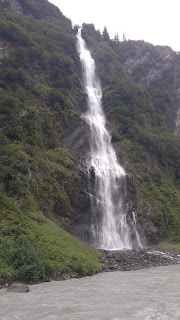 Bridal Veil Falls in Keystone Canyon, AK.  About 10 miles outside Valdez.  It's a couple hundred feet tall or so, hard to tell in the picture. 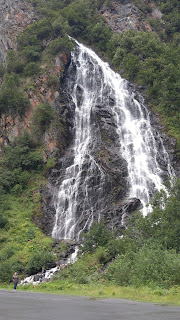 This makes the scale of Horsetail Falls a little easier.  That's Laurie standing right at the base in the bottom left corner.  This is right across the highway from Bridal Veil Falls. 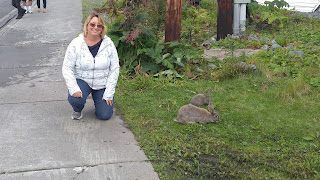 So we were told, an eccentric old woman kept bunnies as pets and when she died, they were turned lose on the town.  They're everywhere, blond, brown, gray.  They're not exactly scared either.  Reminds me of the chickens in Key West. 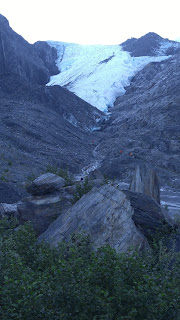 Worthington Glacier.  I turned up the blue color a little, still doesn't look as good in pictures as it does in person.  We hiked right up to the base. 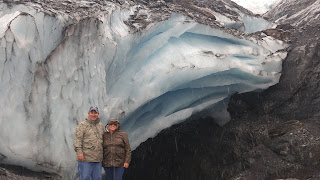 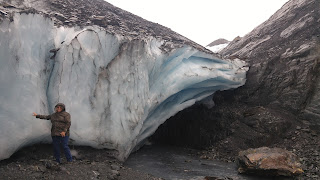 Don't try this at home!  I'm sure the ice from this glacier never breaks off in huge chunks and crushes tourists... 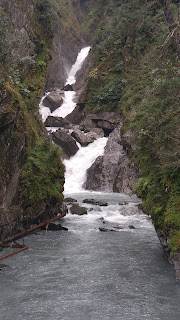 A pretty canyon by the salmon hatchery.  They were trying to return to this stream, though they were actually born at the hatchery just to the left out of frame.  More on that below. 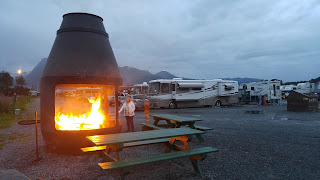 The group campfire at our campsite.  It's a cement truck back end with big holes cut into it to make a fireplace.  That's our motorhome in the background. 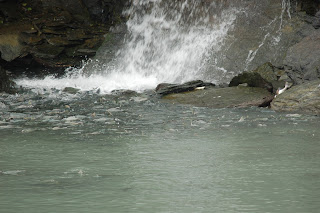 These salmon are also from the hatchery, trying to make it back up an impossible waterfall from the stream they think they were born in. 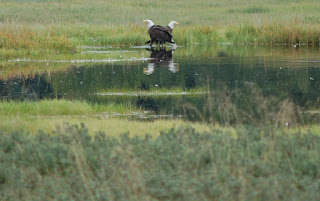 These 2 eagles were at our campground the whole time we were here.  I caught them in an interesting pose here, cool reflection in the water.

This is the hatchery.  When they started the process, there were some salmon spawning naturally just upstream on the right.  They have a fish ladder so that some salmon climb into the blue building.  They take the sperm and eggs from some of the fish to breed a few million little salmon every year that they grow in pens just offshore until they're big enough to survive the ocean, then they release them.  The hatchery is close enough to the original natural stream that they think that's where they're supposed to go.  It might have been able to hold a few hundred, maybe a thousand salmon originally.  They grow so many roe now and release them at a maturity level where hundreds of thousands, millions now return to the area every year.  Most are caught in the bay, but these "left overs" are still trying to repeat the natural cycle.  There were dead salmon everywhere, and still thousands trying to cram their way up stream.