Seward is another cool seaside town, on the east side of the Kenai Peninsula, a few hours south of Anchorage.  We pulled into a commercial park the first night to do laundry after our blissful 2 days dry camping in Portage Valley.  After that, we moved waterfront (something about a waterfront site) for 3 nights.  It’s a city park, so only $20 a night.  No hookups, but man, what a view.  We took a day long boat tour out to Kenai Fjords National Park.  It turned out to be much more than a glacier cruise.  The glacier was epic, no doubt, I got a minute-long video of a couple hundred feet calving into the ocean.  But, the wildlife was just epic.  On one 8 hour cruise, we saw…humpback whales, Orca, fin whales, sea lions, harbor seals, sea otter, Bald Eagles, 2 kinds of Puffin, and bunch of other nesting sea birds I can’t even name.  And to boot, the weather was spectacular, absolutely the nicest day we’ve seen in Alaska.  A wise man used to tell me “Sometimes you’re the windshield, and sometimes you’re the bug.”  Today, we were definitely the windshield.  Here are some pics… 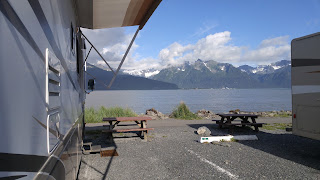 Standing at the grill cooking up some pork chops, I thought, gosh this is a lovely place to make camp. 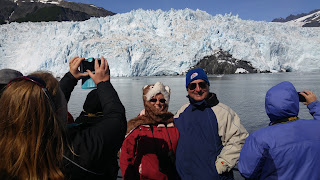 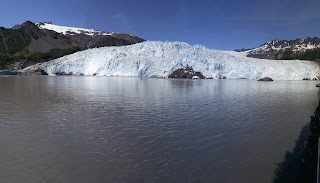 Pictures just don't do it, even in panorama mode.  Not a cloud in the sky.  We were so lucky. 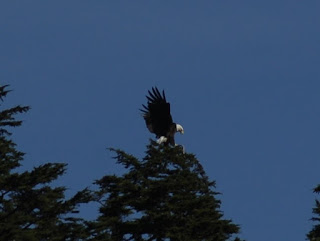 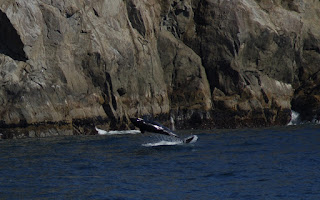 We saw a pod of at least 3 or 4 Orca.  This young Killer Whale was showing off killer form in the jump up and impress tourists contest.  He probably jumped completely out of the water half a dozen times.  Who needs captive whales when you can see this in the wild? 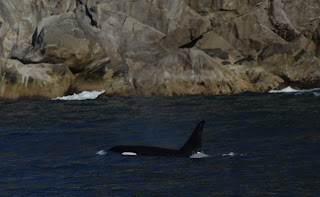 An adult Orca, pretty sure it's female.  The dorsal fin is supposed to be even more prominent on the males. 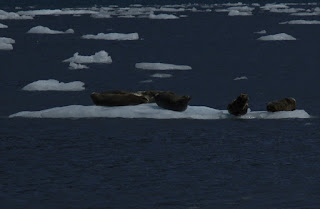 Harbor seals hanging out on an ice floe from the glacier 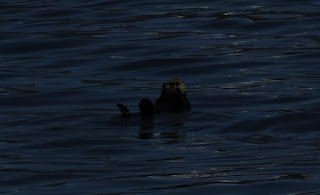 One of several dozen seat otters we saw hanging out.  The fur is so dense they just float like a cork.  They're big too, like 4 or 5 feet long. 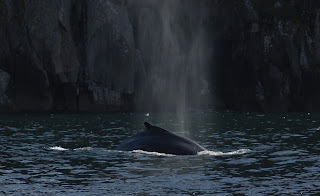 Humpbacks were everywhere.  Here's a cool picture of the dorsal fin right after the blow, you can still see the mist. 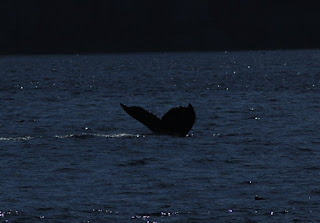 I got a lot of humpback tail fluke shots.  Here's a good one. 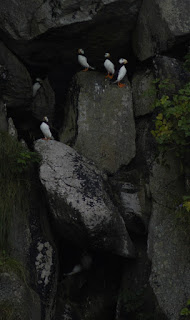 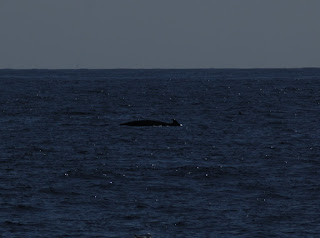 The Captain said this was a Fin Whale.  They're a lot more skittish than the others, and we were out at the mouth of the bay near the open Gulf of Alaska.  They prefer open water, so we were, again, very lucky to sight a 3rd whale species so clearly.  These are the 2nd largest, behind the Blue Whale. 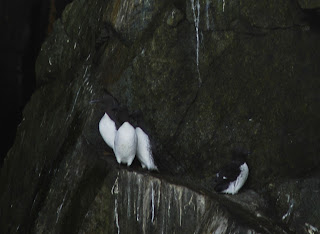 Common Murre.  One of at least half a dozen nesting seabirds we saw. 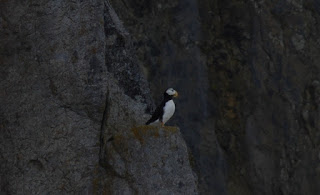 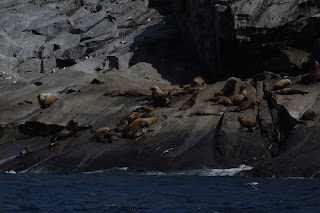 We saw plenty of Sea Lions as well.  You can see the new pups at the left of the picture, down by the water. 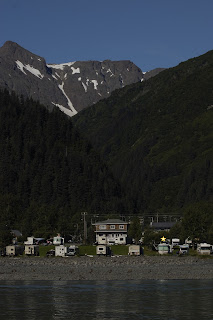 A view of the RV from the water.  I put a gold star above it to make it easier to pick out.  Nice back yard, right?