Well, this road trip is about to turn into a boat trip.  After Valdez, we headed up the road toward Haines.  It took a few days of driving to get here.  We stopped for one night in Tok, which sort of completed our Alaska circle.  Tok is the town we were in after our adventurous drive over the Top of the World highway.  After Tok, we headed east back toward the Yukon and spent a couple wonderful nights at the Cottonwood campground on Kluane Lake.  We didn't have any hookups, but the view and the folks were fantastic.  Then, it was on to the end of the road in Haines.  This little port town is pretty quiet, only one cruise ship comes in each week.  We took the passenger ferry over to Skagway for the day, and it was a madhouse.  They had 4 huge cruise ships in port, and thousands of people walking around.  It was a bit of a shock.  We also toured Steve Kroschel's wildlife park.  This guy is an animal whisperer like we've never seen.  He has wild Alaskan animals that are so used to him that he can take them out in the wild for filming, and they'll come back when he calls.  It was neat getting so close to so many (mostly) wild animals.  This morning, we get on the big ferry for a short ride down the sound to Juneau, another large cruise ship port, but we have a nice spot at the state park outside of town reserved.  Here are some pictures since Valdez. 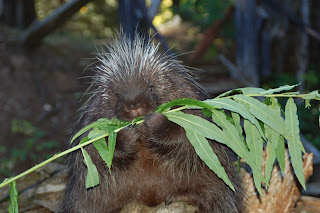 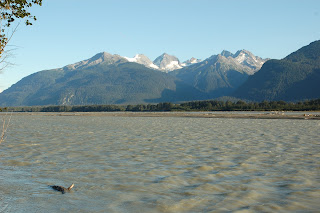 The Bald Eagle Preserve.  We saw several flying around, but in October they gather by the thousands to feed on the late Chum Salmon run. 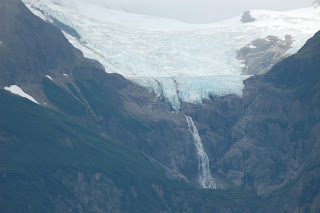 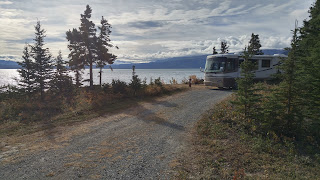 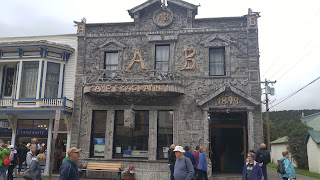 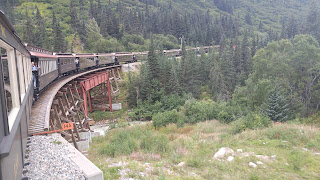 The White Pass and Yukon Railroad tour.  We spent the majority of the 3 hour trip standing on the platform outside.  The stove inside the car was keeping it a little too toasty.  Great views, and hard to believe men used to hike this canyon to get to Whitehorse to catch the paddle wheeler up to Dawson City.  Seeing Skagway was interesting, in no small part because we'd heard so much about it being the port that the gold rushers came to prior to starting the epic journey to the gold fields in the Klondike. 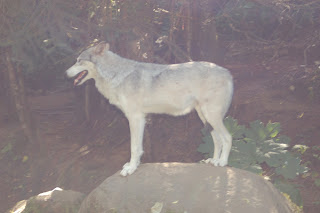 Kroschel's wolf.  He gets in there and plays with the thing.  Respectfully. 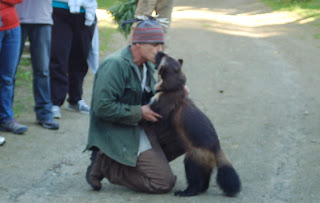 Steve Kroschel.  He's all over YouTube.  The most amazing animal interaction I've ever seen.  This is a wolverine.  He's been raising them for years.  The problem is that they're really just a large weasel, not all that smart.  They don't know their own strength.  Their bite has been known to crack the jawbone of a grizzly, for example.  This thing wasn't declawed or defanged at all.  He's got on several layers of clothes but the kiss is something else.