Anyone who's driven a large RV along I-95 will likely back me up--Washington DC to Boston, the entire "eastern seaboard" is pretty hairy for driving.  The road isn't great, the drivers are in a pretty big hurry, and it seems like you go through a toll booth every half hour.  So, generally, we go inland a bit and avoid that entire section of the coast.  However, with all the traveling we've done, it seems wrong that we'd never seen the Liberty Bell.  So, on our way south this summer we bit the bullet and stopped outside Philly.  It was great.  We camped at a KOA near the little college town of West Chester.  I got my wires crossed and went to the wrong KOA initially, whoops.  45 minutes later we were at the correct one.  We'd gone back and forth as to where to stay and I got confused!

The countryside is beautiful, though a little expensive, and the roads are curvy and fun to drive.  It was far enough outside of town to be completely removed from city life, but close to a train station.  We took the commuter train into the historic district for two full days of touring, including the hop on hop off double-decker bus tour.  It was great, something we might do again because "you can't see it all" in one visit.  Some pictures: 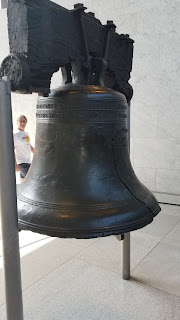 The Bell.  About 4 feet high, not quite as grand as we expected, but still awesome in its historical significance.  No lines in the middle of the week after the kids go back to school! 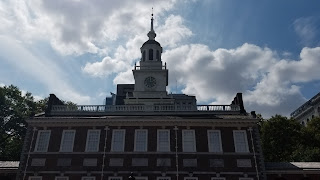 Independence Hall.  The Declaration and Constitution were signed here, so we had to take a tour.  It's pretty simple, but again, so much history.  They've kept it in remarkably good shape and original condition. 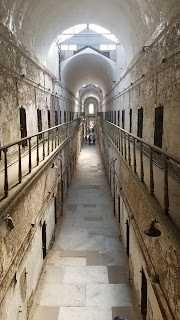 One of the cooler surprises was a tour of Eastern State Penitentiary.  The country's first.  It was closed in 1971 and is being maintained "as a ruin."  Inmates had their own solitary cell and exercise yard, so they never saw or even talked to another inmate.  23 hours in the cell, 2 half hour breaks in a 10 by 15 foot little hard outside their cell. 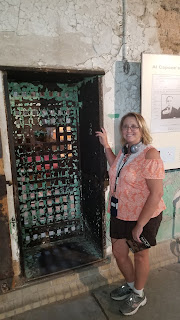 Al Capone did a year-ish in lavish comfort here on a weapons charge.  He was on his way back to Chicago and got pinched.  Even so, his money and fame assured preferential treatment.  His cell looked like a gentleman's library. 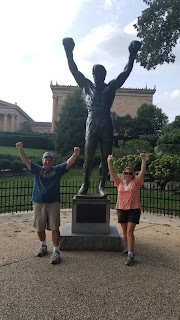 The Rocky statue from Rocky III, just outside the Art Museum where he ran to the top "feeling strong now." 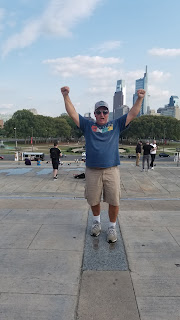 Yo Adrian!  This is the spot of a million portraits, where the camera spun around Rocky as he finally got his act together. 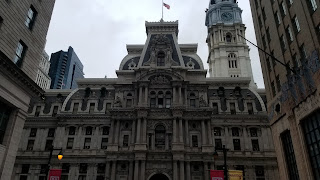 Can't remember.  City Hall?  There were so many cool, old buildings on our bus tour they started mixing together.  Some fantastic churches there too. 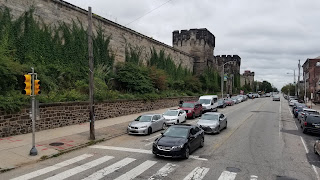 The outside of Eastern State Penitentiary.  It was outside of town when they built it in the 1830s, completely engulfed by downtown Philly today.