After Missouri, we jumped on I-70 and headed east.  We'd never spent any time in the Indianapolis area, so we stopped in two different campgrounds and spent a week hanging out.  The only real noteworthy tourist attraction was the Indianapolis Motor Speedway.  We went to the museum in the infield.  The place is huge.  There are several holes of a golf in the infield as well.  Most tracks you can see the entire infield, and RVs will park down there for the race.  Not this place.  The museum was interesting, with winning cars from many of the races on display.  They had a lot of space to the Unser family, big winners at this track.  Our first park was a couple nights on the west side of town.  Then, we moved to a really nice spot at a KOA east of town, near Muncie.  It was beautiful, with a long trail through the woods for Missy to run on.  She just loves running wild off the leash.  I do have to report that Indiana had the worst roads we've ever been on in the Lower 48.  Even worse than Newfoundland.  Here are a couple pictures from the museum: 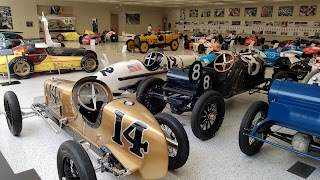 The permanent display of winning cars 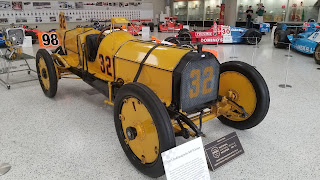 Pretty stark contrast and a great example of 100 years of technological evolution.  Here's the winning car from one of the first big races in 1911... 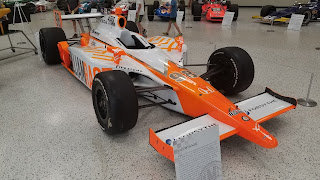