Virginia and the Outer Banks

After Lake Placid, we headed south for a visit with Stephanie and Kevin at their new place in Kill Devil Hills, NC, on the Outer Banks.  On the way, we stopped for a few days at a campground in Mount Pocono, PA which was very pretty.  We went on a nice hike along the river and hung out at our huge spot in the trees.  Overall, a very nice stop.  After that, we had a couple days to kill before the kids would be off work, so we stopped at Natural Chimneys State Park in Virginia, not far from Staunton.  It was a very nice campground we had practically to ourselves.  Missy had acres and acres of field and miles of trail to run on free from the leash.  That girl loves a run in the woods.  The park is named after some interesting limestone formations they've managed to preserve.  We stayed a couple nights then moved on to Kill Devil Hills.  We parked in their driveway and slept in the house for a change of scenery.  It was a wonderful visit.  Their neighborhood is just behind the Wright Brothers National Monument, where they executed their first flight.  Kevin took us on a cool beach drive in the 4X4 where we were able to see some wild ponies, the Corolla herd.  They have wild horses on a lot of these barrier islands along the east coast.  On the way north our first summer, 2012, we stopped in Assateague, VA and saw that completely separate herd.  John and Phyllis came over from Raleigh for a couple days, so we stayed a night in "the cabin" over in Jarvisburg.  All the while, we were watching hurricanes, which more or less timed our departure.  With Brad, Eric and Mom bugging out to get away from Irma, we decided to all rendezvous in Arkansas.  Here are some pictures from this leg of the journey: 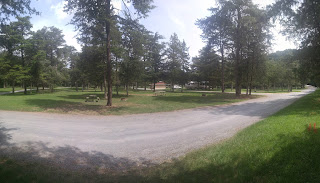 A panoramic view of the empty campground at Natural Chimneys State Park.  Full hookups, pretty much all to ourselves.  Cool! 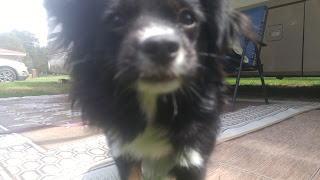 Missing mugging for the camera 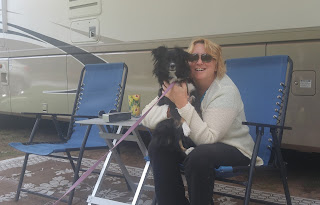 We very often just sit outside listening to music on a beautiful day, taking in the fresh air.  Missy and Laurie say "I wonder what the poor folks are doin' today?" 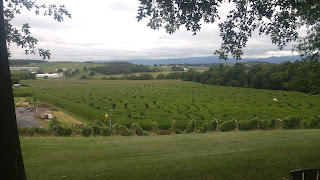 A corn maze out in the Virginia countryside.  Nope, didn't try it. 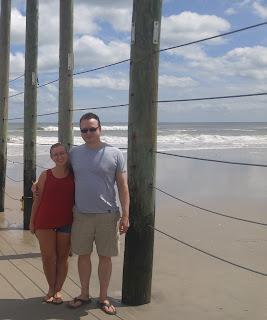 Kevin and Stephanie.  The poles and cables mark the North Carolina/Virginia border, and keep the Corolla ponies from straying into VA. 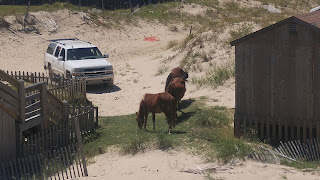 Corolla Ponies eating some of the only green grass in their area.  Somebody's yard, of course. 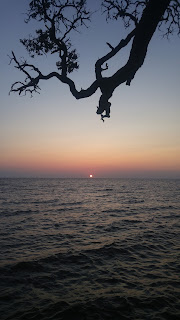 Sunset over Pamlico Sound from the marina at Kevin and Steph's neighborhood, just a few minute's drive from the house.