Well, we're back in the USA after a very nice 3 weeks on the rugged and beautiful island of Newfoundland.  We're currently in Maine, headed for Vermont, to stay in the cool for a few days while we figure out our next move.

After Twillingate, we stayed with Loretta's first cousin Philamina (Phil) and her husband Jerome.  They live on a pond outside the provincial capital city of Saint John's with plenty of room for a couple motorhomes to invade.  Some people are so courteous like that, having homes where we can park for free.  We stayed a few nights and had a good visit, including a trip into the city to see the sites.  Fred got a call from the medical folks and his turn came for an appointment all the way back in Corner Brook, so they left on Monday, while we hit the ferry on Thursday.  We stayed a few nights at a cliffside campground called the Celtic Rendezvous on the east coast.  It was very scenic and relaxing, with humpbacks playing in the cove right below the campsite. 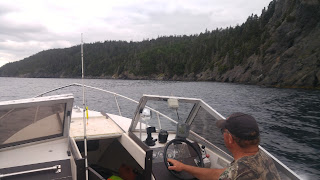 Jerome took me cod fishing near the house.  We caught a few, and saw some bald eagles to boot. 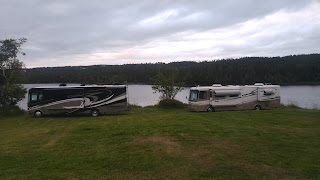 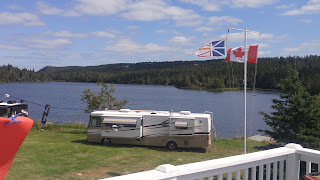 Our rig and the flag of Newfoundland and Labrador alongside the Canadian flag.  I think we see more Canadian flags at people's homes than US flags back in the States. 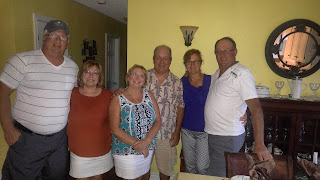 The group, Fred and Loretta at left and Phil and Jerome at right. 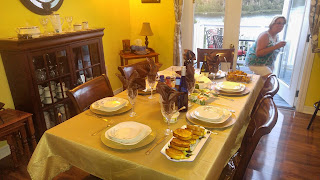 Laurie coming back in from the deck "oooh Phil, what a lovely table!" 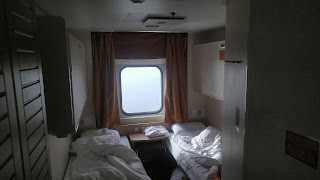 We actually got a window in our cabin for the overnight journey from Saint John's (Argentia, technically) back to Port aux Basque, where we crossed over into Newfoundland.  It's a lot further from the east coast. 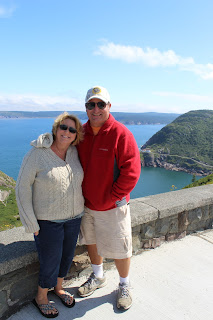 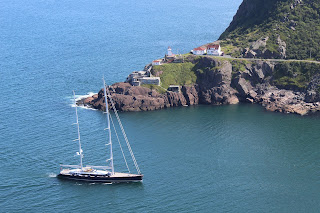 This was a pretty lucky shot.  At first glance, this just looks like a normal sailboat with 2 masts, just a normal ketch coming back in from a day sail, right?  It's actually a 186 foot long mega yacht called the Mondango III.  If you zoom in, you can see tiny people on the deck.  For a mere $200,000 a week, you can charter her for a cruise.  Room for 5 couples, so split 5 ways that's only $40K a week.  What a bargain! 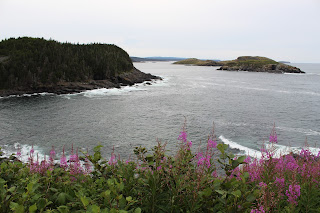 Our view from Celtic Rendezvous 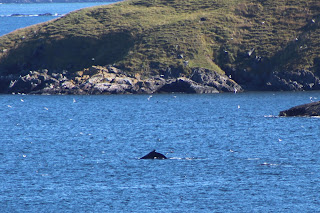 Whales playing all over the place 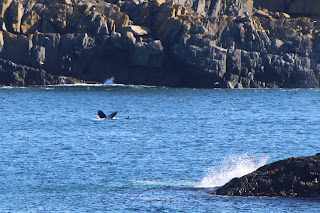 Really hard to get a clear tail fluke shot 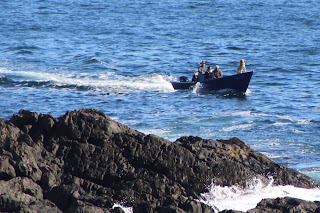 That's a good dog.  Missy would jump in and try to catch a whale.