After Montreal, we hopped on the Trans Canada Highway and headed west a few hours to the national capital, Ottawa.  We stayed at a nice municipal campground just outside of town, a lovely spot in the woods but close to town.  We did a lot of running around, country drives, sitting outside and enjoying the weather, but no touring downtown.  I know they have some cultural attractions downtown, but the traffic getting down there always seemed daunting.  Plus, I had a lot of work to do on the laptop, so we stayed closer to "home" on the west side of town.  Laurie did find a really cool attraction outside of town that was right up my alley.  During the Cold War, Canada built a doomsday bunker outside of town (near us) for the government to operate out of.  It was decommissioned in the 90's and turned over to a private conservancy.  Very interesting tour and reminder of what things were like back then.  Hard to believe it's been almost 30 years since the wall came down.  Only a couple pictures: 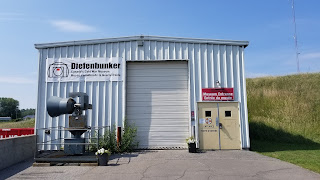 The entrance to the Diefenbunker, jokingly named for the PM at the time, John Diefenbaker. 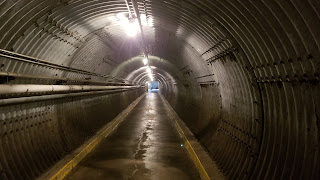 The entrance tunnel through the blast door.  They built the bunker by excavating a hillside, building a 3 story concrete structure with 3-foot walls, then burying the whole thing.  Reminded me a lot of the entry tunnel to Cheyenne Mountain, one of our own "DiefenBunkers."